After the joy of watching Stage One in Masham, the next day was to the joy of the first climb of the day, Côte de Blubberhouses (the Guardian's take on French Yorkshire climbs).

The journey there this time managed to get more convoluted than stage one's in that we tacked on a walking section. I was keen to ride, having a penchant for off-roading, but when I saw the height of the bracken I sharply changed my views.


View Pateley Bridge to Blubberhouses in a larger map

The car journey was quite dull, apart from going up past Two Stoops on Naught Bank Road. Luckily I've got that here from another time, just so you don't get to miss out.

The really useful thing here is that the nearby Thrusscross Reservoir has a visitors car park. It wasn't quite full when we got there, just because many people where using the verges for the next mile until the road closed sign. And there was even a car park at the end of that. We stuck to our plan, always a good idea not to dither! It was only a short hill to start!

Again, our seven year old make short shrift of the slope. Then, lots more parking space! In fact so much, one of our cars is here. Cars are passing, along with faster riders. None too fast or close making it a great riding experience.

And then, the end of the cars! Stopped cars get passed and we head up towards the race through the road closed signs. Although that didn't seem to stop some car drivers, not quite sure why, but heh, still slowed considerably by lots of walking people, also our main concern. I'd suggest that we are still quicker than any car passing us by now. We'll get to the viewing points much quicker than them!


We had scouted out a good place to see the race. Not right on the road side but with a view of over a mile of racing up to the King of the Mountains line. The hillside was scattered with people who'd also thought the same thing. Luckily it was a big hillside! And the whole place came alive, much like yesterday in Masham. People where cheering, despite there being no chance of it carrying to the road side. Except that it was loud enough with enough people that it did.

Anyway it was a short while until the publicity caravanne made it's way along our section. I'm not sure if quite such a bizarre view has been seen nestling in the Yorkshire ferns.

Then onto waiting again. Lunchtime, talking, a picnic, games, it seemed to become a day out with friends on a summer's Sunday. Surrounded by thousands. Also in the bracken. With a lot of bicycles.

The mela was punctuated with the odd "Ooo" and "Ahh" as vehicles passed on the below road. I did that "I know what's happening, no need to do anything yet" nonchalance and lounged around with a pork pie for company. Well, that and the others trying to get at the pork pie.

Time passed easily and, taking me by surprise, the escapees appeared. 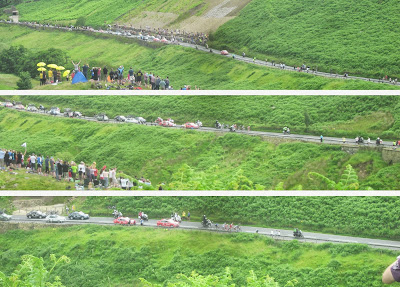 We watched the few riders and plethora of support cars as they raced for the top. Well, raced-ish. It wasn't a fantastic challenge as the riders seemed to focus on trying to get all the way to the finish and not waste energy on scraping for the morsels of a category 4 climb.

And back to waiting. This time I stood and surveyed the horizon. This time I'm looking for helicopters, the first sign of the main race coming through. Then, three dots appeared which rapidly swelled to five rolling around the countryside. Now, four of these are carrying VIP guests, only one is the TV. It becomes obvious with it's positioning and a big bulb under the front housing the camera. As it passed it went right over us, filming the crowd on the hillside. It was close! 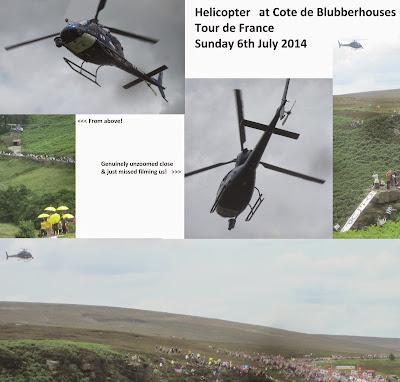 In fact it was so close as can be seen from this video from the other side of the road. We're near the rock opposite down the valley, and the helicopter is just above us!

Yes, yes, I know, there's a biek race going on, what's happening. Here they are coming up the valley. 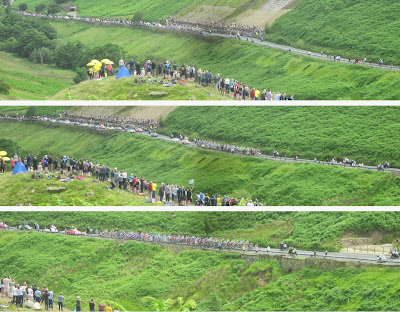 And finally cresting the King of the Mountains.

And with that, it was just time to head back. This time as everyone wanted to head back at the same times, the roads were a little crammed. It was great to see so many different bikes, in slow motion. Notice that the real way to clog up a road completely is to use a car when there's so many others around. They are going at walking pace slowing everyone. Simply, they would have got out quicker by pulling over, waiting ofr it to clear, then trying.


Click on the square box bottom right to get full screen, well worth it!

And back in the car, at the end, where the roads have opened up. Everyone else stayed up in Yorkshire whilst I hit the A1 south to get to my home town of Cambridge to see the joys of the start of Stage Three. Another adventure to come! Last thing that day was this sighting on the way home. 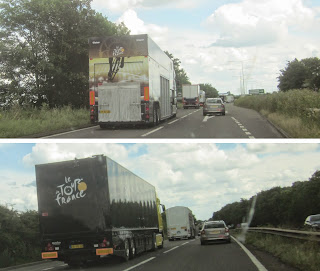 Right click to get full screen, well worth it! Full directory on Flickr.
Posted by RadWagon at 19:13