So the new Eddington development is opening in West Cambridge. We had a chance to look around a couple of weeks back. It was still a bit closed off but there was a cycle route through.

It is great that there will be new cycle routes, completely separated from roads into town (through the Cambridge farm site?) and to the north west. And it's great to have a place where everything is so close. People are encouraged to make small trips and it looks distinctly difficult to do by car.

Whilst good work has been done to secure off-road space for people riding, it is quite compromised in places, and quite confusing in others. And that makes all the difference. Routes are only as good as their weakest point.

Here's the map of the site [PDF], which does look good, bar one striking point (below). The map descriptions look like they've done the right things. 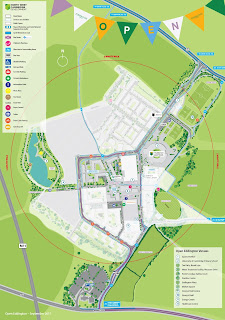 However, when actually riding it on the ground, several issues appear that are completely different to the map.

1. "Shared Pedestrian/Cycle Network". This is really not clear at all. Surface separated (by a thin kerb) and marked as separated. Some signs say different, some a few metres away confirm the surface layout. People will see it as the surface is laid out, segregated, it's a much stronger indicator.
2. The resulting segregated areas are narrow. Even if the whole space were shared, it's still narrow, but not by much. Even if the space is legally defined as shared, it's still not going to be the way people see it, creating conflict between walking and riding.
3. It doesn't come out to the road fully at Huntingdon Road, there are clear signs prohibiting riding, differing from the map's diagram.
4. It doesn't have priority of side roads (like Five Acres), differing from the map's diagram.
5. The long straight roads encourage speeding, even if narrow in places. This is something that seems completely at odds with other new developments.
6. This is a through route for people in cars. If I were commuting from North of Cambridge, I've suddenly got a route that takes me to the Madingley Road Park and Ride. The queuing traffic for this place from the south is pretty bad. Isn't this going to create another queue form the north? 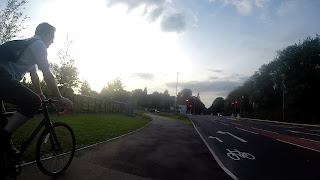 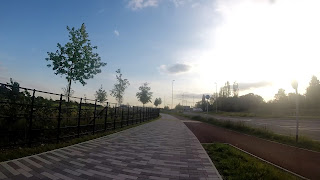 Huntingdon Road: signs (other side!) says you can't cycle on the pavement here 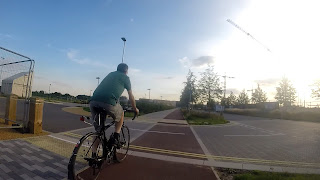 No side road priority next to Eddington Avenue 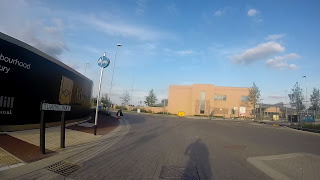 Segregated sign on Turing Way, not shared use space

Two different signs close to each other saying different things


So, why haven't we learnt from previous developments on these issues. It's not like we don't have great examples not very far away.

Just half a mile south of here, on the West Cambridge cyclepath (to Coton), there's a great peice of Pedestrian/Cycle infrastructure. A large kerb, clearly defined space for people walking and riding. And, the really silly things is that it's only a little bit wider than the space given in Eddington.

I work around quite a lot, and see lots of different infrastructure in new developments. Every other new development I've been to recently (Cambourne, Hargate, Red Lodge, and more) have roads that change direction at least every 100 metres. Every time I drive there 20mph seems fast. So that's the speed I don't even want to exceed. We know that long straight roads means motor vehicle speed increases, making it awkward for everyone else to negotiate crossing or joining them.