So this appeared recently as a clipped section from Lincolnshire Police safety advice to children. 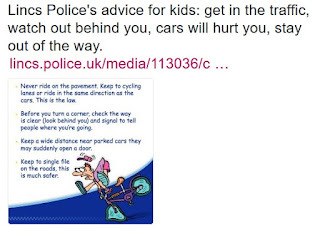 I thought the tweet comment was a reasonable summary of their poorly thought out leaflet. I thought it also deserved a lot more analysis and a good run through on how it directly and indirectly contradicts the GOVERNMENT advice on cycling practices, importantly the Highway Code and BikeAbility training.

The leaflet is here, although I've just focussed on the "on road" statements. It's rather telling that they choose to advertise to children by showing someone falling off. This is well known to play on children's fears and put them off riding. Not exactly a good way to encourage children.

So, the 4 statements they have asserted.

Statement A.
This is just a really poorly written statement and easily misinterpreted. The "This is the law" bit makes it look like all parts of this are legal requirements. They are not.

1 "Never ride on the pavement". Except when it's a designated cycle path. As written in Highway Code rule 62: Cycle Tracks. These are normally located away from the road, but may occasionally be found alongside footpaths or pavements".

2. "Keep to cycling lanes". No, not a legal requirement at all or even good advice. BikeAbility says ride an arms length from the kerb. For multiple reasons this is the optimal position and is often at odds with poorly designed cyclelanes. This is subtly admitted in Highway Code rule 63: "Use of cycle lanes is not compulsory and will depend on your experience and skills".

3. "Ride in the same direction as cars" is the only bit that gets close to a legal requirement. Although I know many places that have one-way streets for cars that allow people to cycle the other way.

Statement B.
Again confusing. "check the way is clear (look behind you)" just doesn't make sense. It's because it's missing the reasoning and talking about what you are acutally doing.

It is good advice to look behind you and signalling is a good idea. However, the reasons why are completely overlooked and may result in riders doing completely the wrong thing. The idea about looking behind is to enable a rider to move out to a controlling position to stop poor overtaking close to a junction. Also, if there's no-one to signal to, don't do it, keep your hands on the handlebars.

Statement C.
The only statement that has my support. Always "a open door and a bit more" when passing a parked car. This is one of the biggest collision risks with people riding. I will note that advise to look behind when pulling out, vital if passing a parked car, is completely missing.

Statement D.
This is just plain wrong. Doubled-up riding is recommended when dealing with hazards. Making a group of riders look more like a car or bus means a great reduction in risky or rushed overtaking and from oncoming traffic (see here for more details why). Reguarly, BikeAbility instructors will move groups of children around on the road, and they'll employ doubled-up riding quite regularly and when appropriate.

In Highway Code Rule 66: "never ride more than two abreast, and ride in single file on narrow or busy roads and when riding round bends". So, that's not more than doubled up, and don't do it when it might be difficult to do. And to complement this, BikeAbility will teach riders to ride in the centre of a lane when narrow or round a bend to stop poor overtaking then.

In Summary.
It's really important that organisations of authority in the areas covering good cycling practices act and promote consistently. Whilst Lincolnshire Police probably were trying to do this, their half-handed attempt is, at best, poorly thought through. At worst it's just downright dangerous.

Here are all the GOVERNMENT sources of this advice for people cycling, which does seem at odds with what Lincolnshire police believe.

Posted by RadWagon at 17:38 No comments:

Developers at CB1 are coming down hard on people locking bikes the the tree guards around. They try to claim it's all rail commuters that do this. 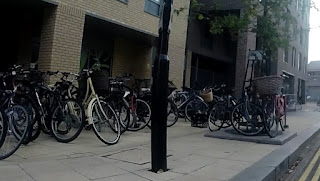 I decided to have a look on Saturday, so no weekly commuters included. I find that there's still loads of bikes, a lot not close to the station. Clearly this isn't commuters but locals, a good proportion of which are a long way from the station cycle park.

It's fairly obvious that there's inadequate local cycle parking stands. So this lies soley at the feet of the developers. And there's a clear way to improve the situation, put in more.

Posted by RadWagon at 18:09 No comments: