Watched this and was duly worried about the man. The crash did look awful, slaming into a telegraph pole and falling head over heels down into a ditch. I expected there was potential for concussion, broken bones, deep wounds to the body, and so on. 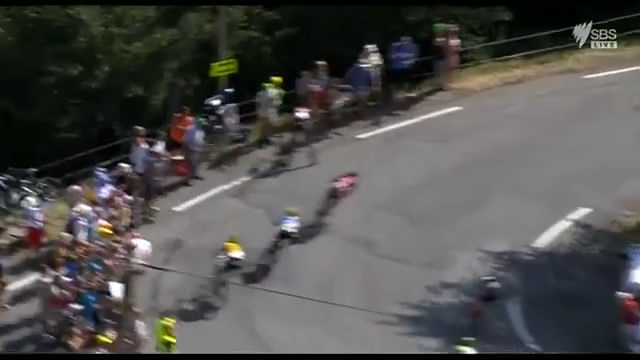 There was quite a wait whilst people tried to find out what happened. Also, sadly, there where no race cameras nearby on the road to show him getting back on, so we were left wondering even with the positive commentary.

Then, he appeared, cycling towards the finish, looking irritated and working hard not to lose time. I think everyone watching breathed a sigh of relief. He started joking during the post race interviews and seemed completely unscathed.

Then, I start getting this nagging feeling. And I realised this clip would be played over and over with all those helmet proponents screaming that it exactly supports their point of view. Looking through lots of the comments, I've managed to spot some stuff already appearing, surprise surprise, on the Australian websites.

Quite why a downhill race has any comparison to going down the shops is beyond me, of course. It's like saying driving around town is the same as racing Formula One.

Anyway, I'd thought I'd spotted something earlier, so I had a good look through the footage. Did the crash actually impact on the helmet? 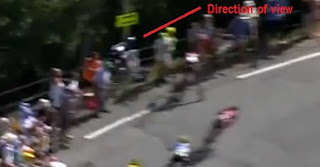 It's difficult to see, but it really looks like the helmet didn't hit the telegraph pole at all. The point of impact looks to be the side of his neck and shoulder. At the time he's looking perpendicular to his direction of travel and the centre of the pole is clearly behind an upward facing helmet.

When talking about the accident later, words like "headbutted" where used. But this was clearly far from the case. I've no problem with Geraint using these words, it happened very quickly and it's very difficult to know what actually happened. Also, it's not far from a reasonable description. No-one would use the words "hit the side of shoulder and neck" when a good ole "headbutt" will do. Sadly, reporting of this word will conflate the "helmet saved me" story.

In conclusion, I expect a whole load of helmet support from the parts of the world that have low cycle use, like the Antipodes, UK, and USA, whilst completely ignoring the evidence. In fact, this whole story shows exactly why helmets are a sideline when it comes to safety.
Posted by RadWagon at 10:49 No comments:

Doing the journey on the 13:15 on Sunday 12 July 2015, speeding it up 10 times and adding in the irrepressible Public Service Broadcasting's version of WH Auden's poem "Night Mail".

Just a small quick clip that shows the speedy exit through London suburbs, conurbations of Hertfordshire, and increasing rurality heading out towards Cambridge. I really love the way the view opens out the further along this goes, giving some stunning sky scapes and views nearer the end. 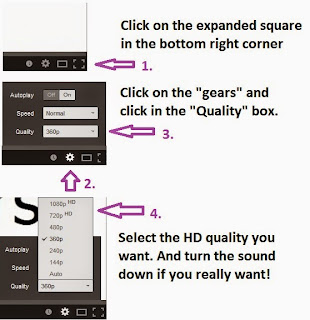 Posted by RadWagon at 21:46 No comments:

A BBC Report appeared on the Europe side of it's website. It's bold headline is "Paris to let cyclists skip red lights", which just seems extraordinary. Hmm.

So who thinks that "Paris to let cyclists skip red lights" is the most important part of this story? Okay, it's bold and brash, but really there's something more important here.

Phrases such as "Paris, blighted by smog this year" actually lead to something different. London, funnily enough, has a worse problem than Paris.

Then things like "Paris is looking to triple the amount of bicycle journeys in the city by 2020 - ensuring people use bikes for 15% of all journeys." might make you think.

What is London doing? Well there's lots of new fancy bike lanes. Well, actually not. There's a few headline projects. There's nothing that'll take the percentage of people using bikes across London (currently around 2-3% as it's not just the central area) to anything like 15%.

So, along with the older news that Paris has put in place temporary bans on half the cars, the news here is that whilst Paris is working hard to enable it's citizens to get rid of the pollution that kills thousands, London is doing pretty much nothing. All because politicians here are scared of taking on the motor lobby.

Thus we die, again I say, in our thousands because people in awe of the motor car have a toddler trantrum when things don't go their way.