Preparing for a Sea Change

Okay, nothing too serious, just requiring complete flexibility I never thought could happen. I'm having my flat re-carpetted.

To those that don't know, my place is tiny as it's near enough to the centre of Cambridge to make it highly prised floor space. I have lived here for over 20 years and don't consider looking after it a high enough priority compared to living a good life. So, I'm currently in a process of replacing a lot of fittings and fixtures that have been here a long time.

That sounds absolutely correct you might say. However, in a cramped space, with many gathered items over those years, how do you replace the item that everything else sits upon? Well, a plan of extreme detail and willing contractors.

First, empty the drinks cabinet (the hardest or easiest job?). I have an old 19 century meat larder, which is normal filled with glasses, spirits, mixers, water, beer, and wine. Most went to other rooms, but a retained a limited supply to move into the kitchen at the last moment this evening. And an empty meat larder results. 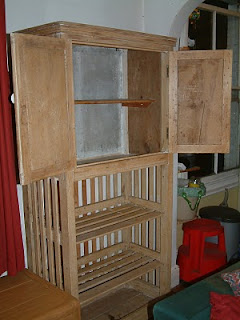 Then, some preparation for tomorrow. Newly purchased carpet protector for rolling chairs and duct tape & scissors for thos last minute adjustments. All on a cleared blanket box. 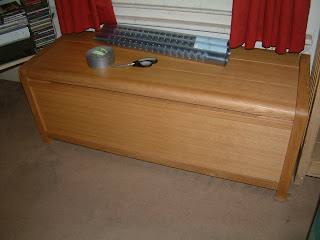 As part of the change around, I'm removing the broken storage heaters. Unfortunately, this removes some useful shelving as well. As a temporary measure, things balance on the back of (flameproof) sofa. 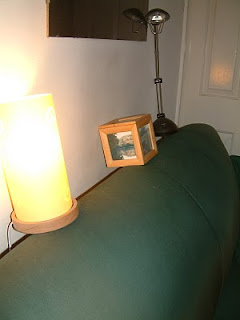 Now the nitty, gritty. When the job was sized up the estimator said nothing about wires. In fact he looked at it directly and said there wouldn't be a problem. On reading the paperwork, it suggested that wiring would be a problem. And given a bit of thought, I really think doing the section under the alcove shelving will be pretty awkward if it's not up. Rather than unplug and rewire (a major, major job) duct tape came to the fore. Taping it up to the bottom of the shelf seemed the natural solution! 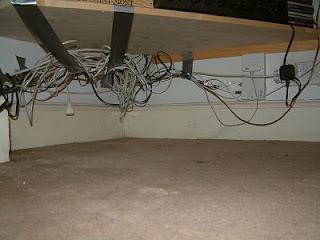 And this solution was followed round the room, although became impossible underneath the computer stack. Although most stuff did get off the floor, I can't help feeling that the only option if needed will be to power down, unplug and pull up here. Ah well. 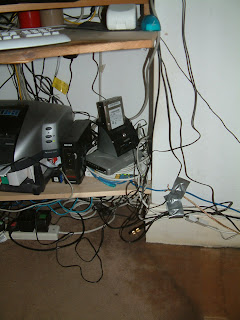 Now, where did all that stuff go? Actually I got rid of a lot, but those consumables found some odd corners. Where else do you put water other than the water closet? 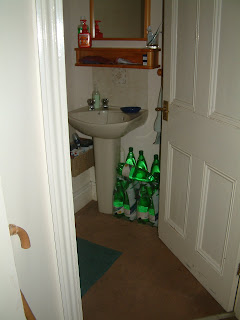 And the first storage heater bit the dust, minus the storage bricks that have a whole load of uses other than the original. (And that's your letter, Becky!) 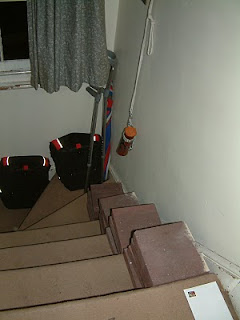 And, funnily enough, my bedroom has now got the status to which it always aspired. Wine, cushions, candles, er, speakers, computer magazines, keyboard, and laminator. Just don't ask what I'm laminating. 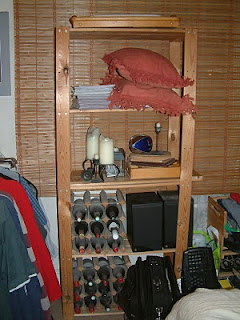