The Squabbling for the Bottom that is Destroying Our Transport System


So, after the last post (possibly the appropriate piece of music), where the Tories announced billions of pounds of going backwards, repeating the same mistakes expecting different results, we have Labour going the same way. As before, the soundbite riposte:


"Building more ‪#‎road‬ lanes to solve ‪#‎congestion‬ is like loosening your belt to solve obesity. "

After a lifetime of voting Labour they've managed to thoroughly put me off. As they squabble for the 15% of ill-informed vote by trying to out-UKIP UKIP, many more, like me, are deserting them because they fail to engage intelligently. 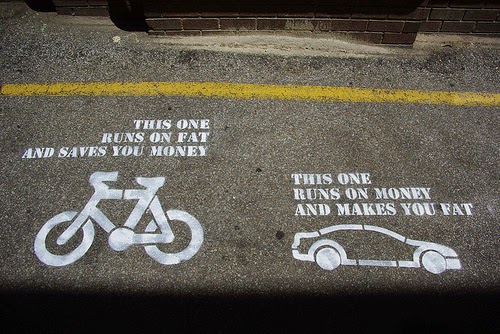 Where are the speeches that set the agenda rather than follow it? Inspiring people to be better isn't a bad thing. Because, as they do fight for that lowest ground, the only people who win are those who truly peddle it, UKIP.


Here's a report on the actual costs of motoring from the IPPR. For a slightly easier read (with pictures), try this iPayRoadTax article.

Currently, motoring is still subsidised by the taxpayer, and continues to ensure we are held back from helping our economy grow and trap ourselves in an unsustainable system that mires the health of the nation.