A short post about a ride I did a few weeks ago.

View Blewbury to Ginge Ridegway Circuit in a larger map

The idea is to get away from motor vehicles as much as possible and there's plenty of chance to do this here.Of course, along with many more wild environments, there's a bit of "up" involved. I start at around 60m above sea level and at the top peak out at just over 200m. This isn't a particularly hard or big in comparison with other parts of the UK, but with some of it's off road nature can be a bit challenging.

So here's the clip of the full route described below.

Starting in Blewbury a small detour round the village to avoid the main road as much as possible. I allude to why in this post and especially at the end of the clip above you'll see the issues with traffic, further analysed here.

After a short, sharp bit of the A417, it's up to Churn along Bohams Road. This road is a tad rough, but perfectly usuable all year round. At Churn, as the road runs out you go over the old railway. There used to be a station here accompanying an old soldiers camp. The track to the west starts to get a bit rougher and a final turn up Gore Hill to the A34 crossing gets you to the ancient route of The Ridgeway. 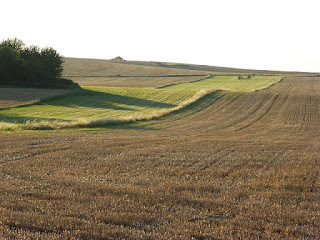 You've done most of the climbing by now, but thanks to the rough surface and prevailing headwind the next few miles can be invigorating. They are certainly exhilarating with long views either way. 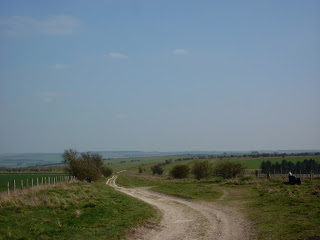 After topping out at Ginge Down, there's a right down a track. After letting go for a short while I was quickly on the brakes. Tracks round here can be covered in large lumps of flint which, aside the form the odd puncture worry, can throw the wheels sideways without as much as a "How's yer Father". And then the track corners sharply. Yet, more exhilaration, but with a soupçon of "please let me live".

At the bottom, you join the cycle route NCN544, going the other way, if you see what I mean. The road is very quiet and leads to East Lockinge followed by West Lockinge, which are two very pretty villages. Clearly money here comes from horses, with a statue on the village green. 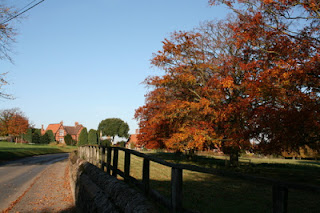 Turning back through Ardington and then almost back on yourself and up the hills again gives a good sense of the unachievable circle. Just before closing the loop, there's a track back east which saves you the hassle of going a bit higher up the hill onto the cyclepath. Well, just consider that for a moment. Surely there's a reason the cyclepath is up there? Well, yep, as my backside will attest. It's fun, I'll give you that, but it's not really for bikes, and there's a clue in the last paragraph.

This route is clearly used by horses. Their hooves put cross-direction grooves in the mud in teh wet of spring. Later, these lumps harden to rock (well, almost!). So this track consists of lots of 1-2inch striations across the path making every second a bumpy, lumpy, rumpy affair. True, there's some relief at Ginge Brook as you have to get off to get the bike up the slope although it's a bit of a shame to see why it might be difficult.

After another mile of gluteus maximus massage, the cyclepath comes back down the hill and a great flat surface greets you like a smooth banana sundae. Ahead a few strange buildings appear on the horizon. It gets bigger and stranger the closer you get and you'll find yourself able to ride through the continuing scientific centre at Harwell, the reason I grew up nearby.

At this time they're building so there's a diversion round the campus. But then, it's offroad again along a decent track towards Hagbourne Hill. Again, the views are great, although you might want to block out Didcot Power Station. 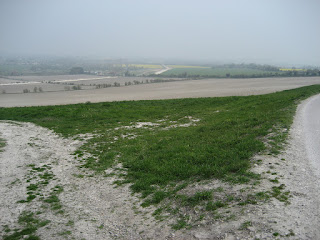 The final bits are road based and quite nerve racking. The first lane is actually listed as on cycleroute NCN544. I'd only ever ride it this way as it's narrow, twisty, limited vision, and has a slope to it. I'm happy going at around 30mph downhill as I feel I'm not going to get a car behind me too quickly. However, the other way where 10mph may be the maximum leaves you feeling very vunerable to people driving at over 40mph up behind you withotu being able to see properly.

The second bit, from Upton, is the deeply unpleasant A417. I've written about this here and further analysed here.