Yes, it's that favourite little blue rectangle, the "Cyclists Dismount" sign. Here it is in all it's glory.

I'm not quite going to say


but it can't be far off. And it's mainly due to the wording really, isn't it. Anyone reading that would quite rightly think it's an instruction to anyone riding a bike that they must get off the bike and push it. But actually it doesn't mean that at all.

The big clue is that it's on a blue background rectangle. These are referred to as "information" signs in the Highway Code. So, this sign is advisory only, it's not an instruction to do as the sign says. In fact, nowhere in the Highway Code, the Road Traffic Acts, or the The Traffic Signs Regulations and General Directions 2002 will you find this sign with the instuction that "A cyclist MUST dismount".

The sign that requires a person cycling to stop is this one. 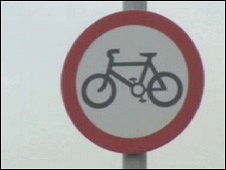 This is an stop "instruction" sign, with it's familiar round red circle on a white background. Speed limits appear the same, so we all know the format well.

There are several irritations about the sign, from a lot of different angles. One irritation to people riding is that there rarely is another sign saying "Remount". Another is it's a catch-all to reduce liability on the road owners in the event of an collision or other accident. An irritation as well is that some people seem keen to tell anyone who is cycling that they shouldn't be doing so.

Lots of wording has been suggested in campaigns to change this, although my favourite would be as follows.

I favour this for a few reasons.
Also, perhaps this is the time to suggest this kind of responsibility should go up the chain. So people when driving sometimes need to be reminded they have a responsibility to people more vunerable than those inside cars.

So, what do you do when confronted by a quick throwaway comment that is less informed about the "Cyclists Dismount" sign. Here's an example.

Often the person is past and going on before you've had a chance to react. Shouting afterwards is not a pretty sight and can make you look like a bolshy bloody cyclist. Something that's unlikely to educate the incorrect statement by the other person. And more likely to leave an unpleasant taste in their mouths that leads to further antagonisms. We have to get people on our side, not fighting with incorrect knowledge!

So you really do have to be quick. As you can hear, I do quickly get in the words "Yeah, it's advisory", but he continues his conversation, possibly without hearing me. He does point out it's busier on a Sunday, but I didn't get that until later. I'd agree, but that's not really the point.

I think my favoured words would still be "It's advisory only", dropping the "Yeah" but including "only". And said calmly and with a smile. Indeed smiling from the start is always my thing on these interactions. And you'll also spot that I stop and hold up while he passes.

Anyway, there are more interesting comments on the clip. Some discussion about whether a mounted bike riding slowly takes up more space than pushing it. I still go for the former.

Anyway, let's have a look at some of the more ridiculous use of these signs. This is a classic in Harlow, Essex brgouht by the inimitable Warrington Cycle Facility of the Month. 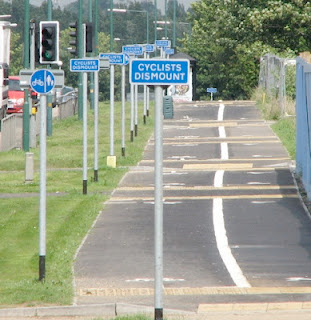 And perhaps we should be looking to the world leaders of cycling facilities, where David Hembrow reliably informs us these signs hardly ever exist.

A separate issue around the "Cyclists Dismount" sign is the red sign with white wording that accompanies roadworks. Here's an example from Oxford uploaded to Cyclestreets.net. 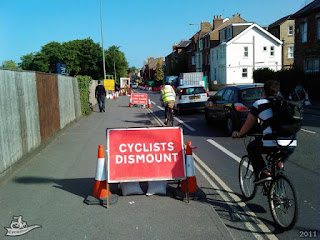 The text under the photo rightly refers to the guidance on road signs like this that say they should NOT be used. On page 6, it says as follows.

Where access is permitted for motor vehicles, "Cyclist Dismount" signs should not be used.


Of course these signs do have a purpose, here's an example of the correct use from Cambridge on Cyclestreets.net. It's real only use is to allow people to walk their bikes along a pavement where a road closure has taken place. 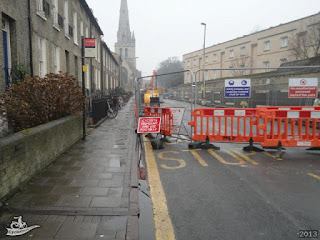 So, what sign should be used when roadworks come into the cyclelane or restrict the road without closing it to through traffic. Here's a start again from Cambridge from Phil Rodgers. 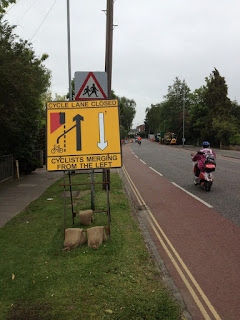