I've often looked at the map to the North West of Cambridge and wondered what exactly is there. It's always seemed an empty landscape, albeit full of farming. The settlements there seem to be small compared to others at this distance from Cambridge, short of the new village of Bar Hill, a myriad of new estates surrounding a shopping centre and light industrial area.

Bar Hill is bound by the A14. Not only in boundary but in everything as there's no motorised way out of them without using the A14. Likewise a small village of Lolworth just a bit further out. Then there's hamlets in the middle of fields like Childeley that seems to have no public access road.

Anyway, my curiosity got the better of me on Sunday, and I decided to have a look by bike. This is the route planned, along mostly quiet roads and green lanes. 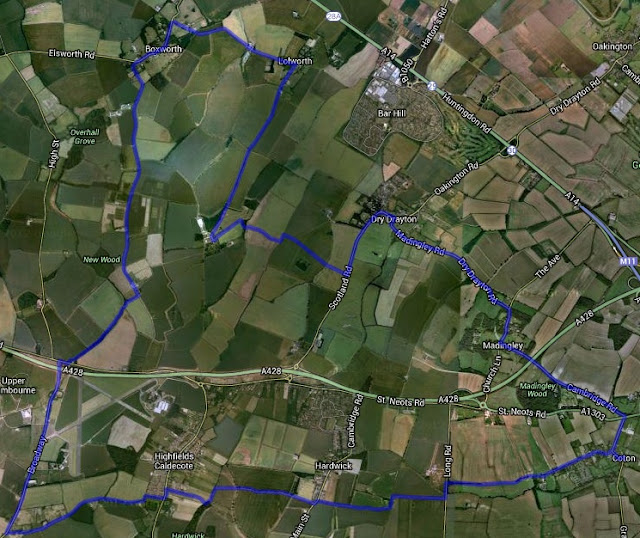 For those who prefer a dynamic map, this is it from Google Maps, although I'd recommend downloading the free software Google Earth to view it much better (download map).

Leaving Cambridge I couldn't help a look along the river from the Con Fen Bridge. In summer the scene is beautiful from the people playing on the banks, through the trees in reflected in the water to the sheep grazing in the distance. 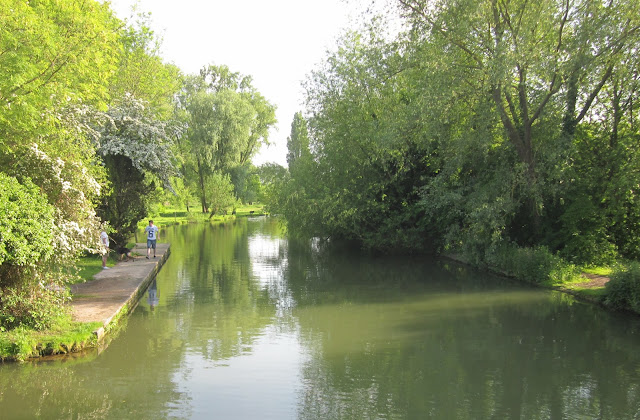 Also, looking back across the Coe Fen with it's meadow plants and The Leys school peeping through the cows lylandi (it's called that because they lie underneath it in the summer).

Going along Lammas Land Road, the Barton Road cyclepath, and Grange Road gets you to The West Cambridge cyclepath which is a great segregated path along most of the West Cambridge campus and leads into the shared-use path all the way to Coton.

And in Coton the video starts.


The road north from Coton is not such a great place to ride. It's luckily mostly free of traffic, although this doesn't mean most people think as their driving past you, especially near the parked cars and often do not give enough space. After that the road to Madingley has similar issues but does have the nice distraction of Madingley Hill Windmill and the American Cemetery on the left. 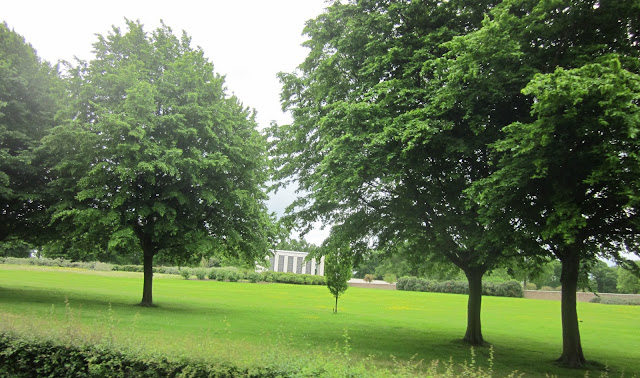 After that it's push on towards Madingley. Try to ignore the noisy A428 as you cross it. Again, a pretty little village with a stately pile in the middle (built in 1543).

From Madingley it's onto Dry Drayton. The roads are better here as there's very little traffic. Unless, of course, there's a blockage on the A14 going west. Then, some will try to rat run it, probably to come back in about 5 cars further forward.

At Dry Drayton there's a useful little side road past the church which keeps you off the main road. At the end of that there's a cyclepath on the other side to take you to the Bar Hill path, if that's where you want to go. I'm not heading that way, but it does make for a useful connection to a local shopping centre.

I head off up the main road which is, I'm afriad, distinctly unpleasant. It is used as a regular rat run with cars trying to max out at 60mph along the straight bits without giving enough room. Luckily the bridleway off to the right is quite quick.

Sadly it's not a good bridleway and is distinctly unfriendly to cycling. I suspect not very many people would even think about riding a bike here, let along decide to try it after looking.

It's a route across a ploughed field which makes anything underneath very soft. This is a problem directly after ploughing but also further into the future. This is used by horses, so the hoof marks are deep in the soft soil and dig in across the route. It means that you have to find a happy medium in between the crop and the path to even get to be able to ride. I certainly would not ever think of this as a commuting route, it's just too harsh.

In the second field the crossing tractor ruts are very deep and unavoidable. These are deep enough to throw anyone not concentrating hard. It's only when a footpath joins the bridlepath that things become better. And that's the thing. Footpaths are maintained to a level that walkers wouldn't complain. In this case the thing would seem to be that the farmer has let the footpath define the field boundary and simply leaves it.

Of course, a farmer has to be able to manage their crops effectively, so I'm not suggesting that this also needs to be done to the bridleway, but the way in which the path skirts the field is an acceptable compromise. Looking at the map there's plenty of possibilities here which might be mutually benficial. 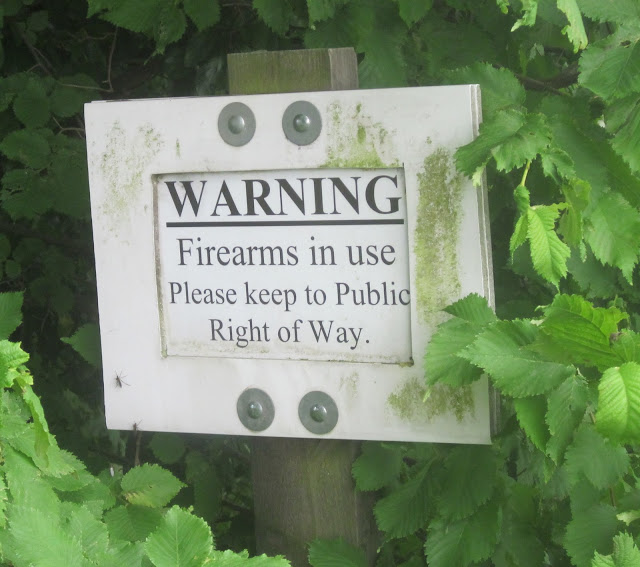 Stay on the Path! 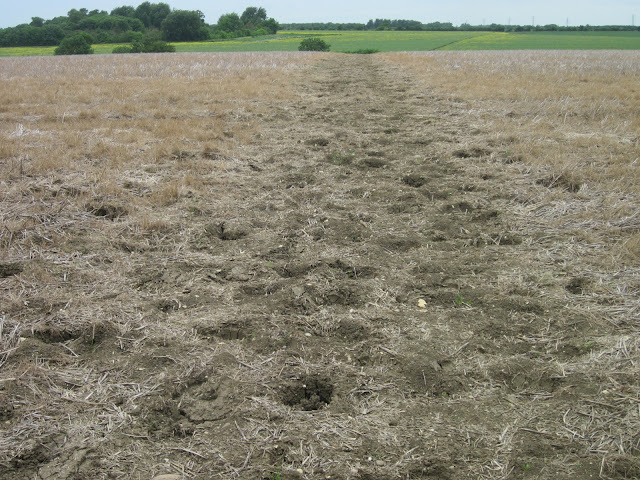 Stay Off the Path! 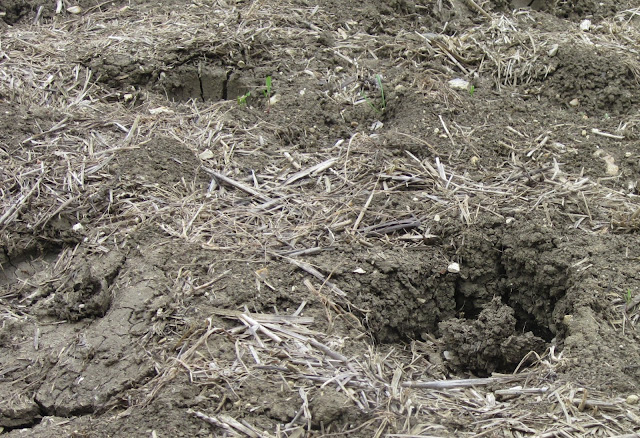 Arriving in Childerley is interesting. It's a few houses around a farm and small manor style house. Looking at the map there's a lot of history here and it's mentioned in the Doomsday book. Still can't help the feeling that you're at the back of beyond, in a nice but eerie way!

My video managed to lose the next section as the camera shook loose, but it's through a field and a couple of gates next to the woods to the north before hitting a old green way. This is full of life and gives you occasional glimpses across the nearby fields. 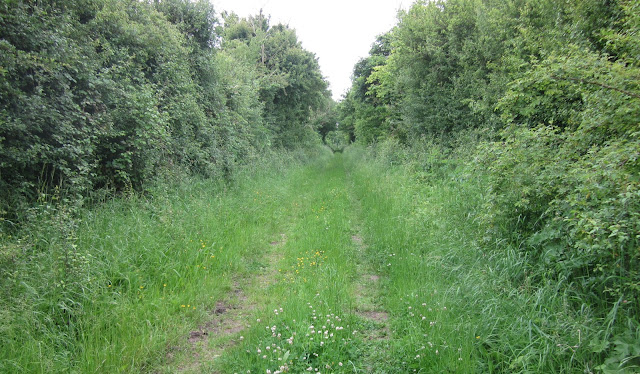 Lolworth itself is one of the A14 carbound villages. You can't go anywhere by car from it without using the A14. However, it's a pretty little village and indeed won the best kept village in South Cambridgeshire once.

Turning north at the crossroads in the middle of the village takes you to a farmtrack and then another decent bridleway to Boxworth. You are greeted by Boxworth Manor with it's ponds and gardens. 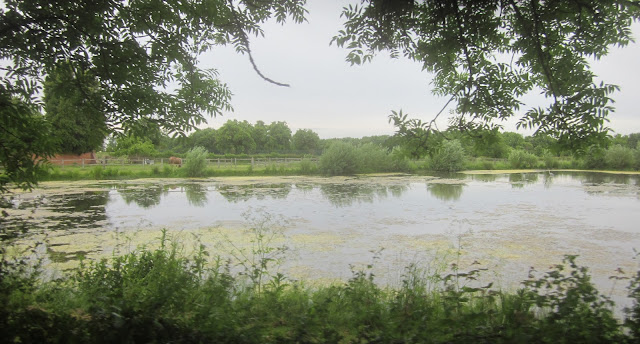 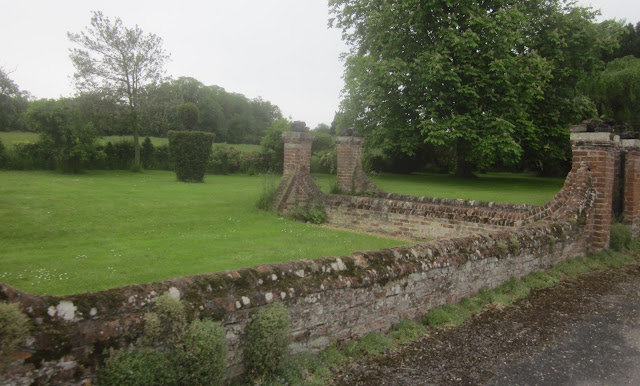 Boxworth itself does have other car access than the A14, however, this isn't necessarily a good thing as cars do belt through the village. There are plenty of nice views to slow down for! 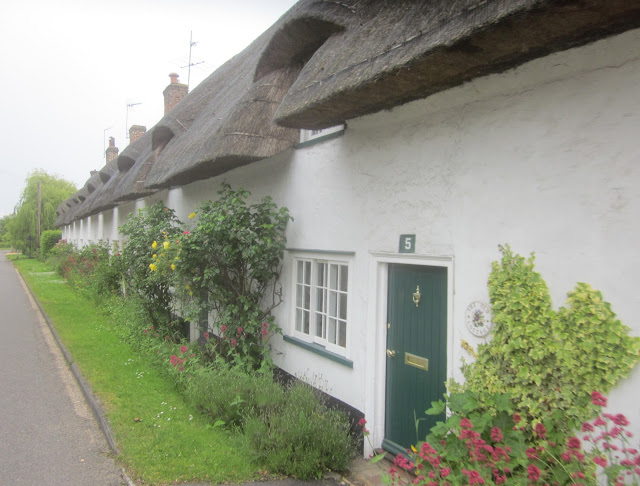 I leave Boxworth turning back south on the impressively named Battle Gate Road. It's a steady climb of 20 metres in 2 miles or around 0.75%. But you seem to always feel it! At the top, there's a place called Battle Gate. A new house is being built. That's it. No gate leading to the hording masses.

Another bridleway continues to a stables where a byway takes a right towards the top of the road to Bourn. Again, there's a feeling of being at the back of beyond.

Finally popping out at the old Cambridge-St Neot's road. It's been dualed so most traffic is now off this road, but it's still not a nice place to ride. I take advantage of a short path to get me to the Braodway, the road to Bourn.

To the right I can see the sprawling, growing mass of Cambourne. Not that I've got anything against it, I just don't want to live there. I'm sure plenty do, and I'm happy for them.

One thing I wanted to look at was how to get into Cambourne. Rightly, the developers have made only two car routes in. It means no-one wants to use it as a rat run, but also, it's not inconvenient to get into by car. However, on a bike, going round the complex could add miles to your journey. I wanted to look at a couple of paths in. I found routes where I didn't expect them. And according to Open Street Map these are perfectly fine. The one I did look for was definitely shut, although probably due to development. 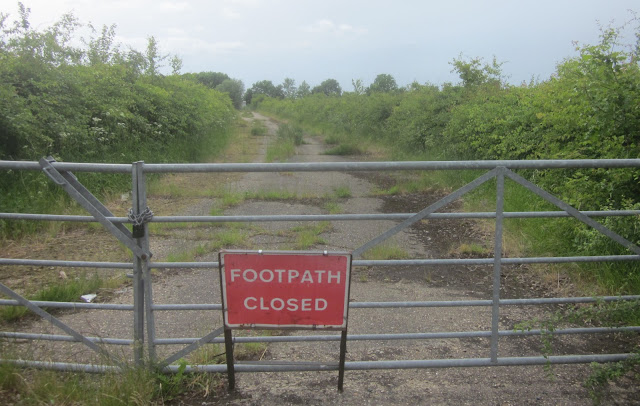 Opposite is Bourn airfield, which is also being considered for a housing development.

My explorations went a bit off route as I really wanted to look at Bourn and especially one or two footpaths. This being one. And I really doubt it could be altered to being a bridleway! 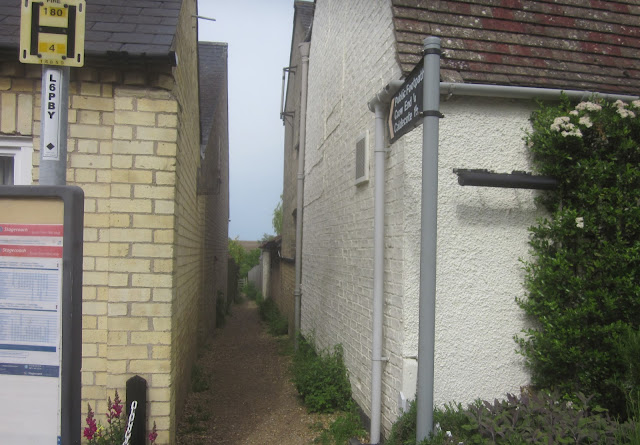 Anyway, back on track. Well the Port Way track. This is a green route that goes almost directly east-west between Cambourne and Cambridge. This would be a perfect route to make a proper cycleway. Not only does it go direct, avoid being near the main road, but it also picks up all the villages along the way. Indeed the Cambridge to Coton end of it already IS a great cycleroute.

At the Caldecote end it's quite green and shaded. This is good and I suspect would still ride well in the wet.  The only issue is gravel traps across the route clearly to maintain the drainage. These are not good on a bike, being the equivalent of a 2 inch deep pothole. 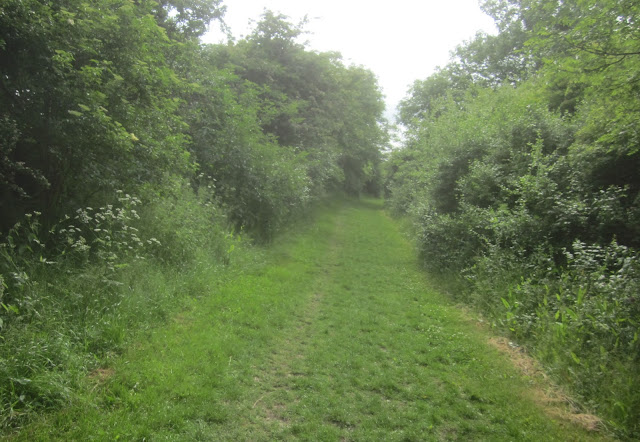 At Caldecote, there is a bizarre 500 metre long completely segregated cyclepath. Yep. Just sat there blocked from the road by trees. It looks almost Milton Keynes like. The thing is, at the end of the path is one shop. Not a village shopping centre or school or village hall. In fact the latter two are further up, after you have to join the road for a good 100 more metres.

It becomes clear when you look at a map, that the path pust have been built at the same time in hte ast couple of years as the housing estate that covers around 100-200 homes. I'd suggest that the developers where told they had to do this when building the estate to cover some kind of sustainable transport directive. It's a lovely path, but if it doesn't get to the local amenties it's utterly, utterly, useless! Unless there's some kind of school-walk-to-school-along-the-100m-of-road scheme, no parent is going ot let their primary school children cycle along there.

Anyway, out of Caldecote and alongside some pretty holdings towards Hardwick. 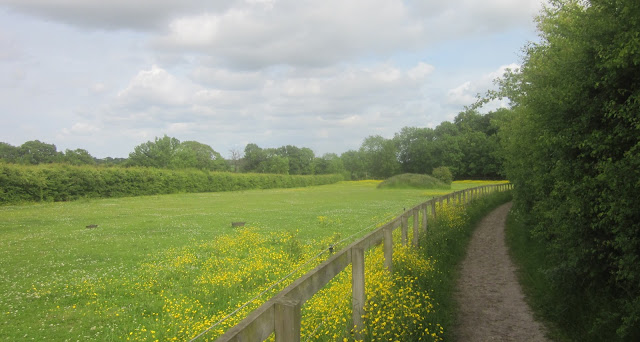 After skirting the bottom of Hardwick, more of Port Way and suddenly there's a long view of Cambridge! This doesn't do it justice. You seem to be looking at all the central landmarks from a slight hillside.

Steadily getting closer and all the landmarks start to stand out. Well, they would if you weren't having ot hold onto the handlebars so grimly. The path has got very rutted with hoofprints and tractor tyre marks. One of the things about being in the country, although this would need to have some kind of plan as this will not be used by most people.

As the path gets to the Long Road out of Comberton, a local farmer has put in a permissive path to take riders to opposite the Coton bridleway. This is much appreciated and, I gather, sadly a result of a horse being killed by a driver on the road here. Another reason I no longer ride down that road. I've posted loads of clips of poor passing when I used to ride down here. I'm just sad that something like that had to happen but relieved that the local farmer was kind enough to get all us riders away from it.

Onto the final bridleway to Coton. and yet more glimpses of Cambridge landmarks, including the University Library.

Coton itself is a pretty village with a traditional village cricket green. This is where the video ends, back where it started. 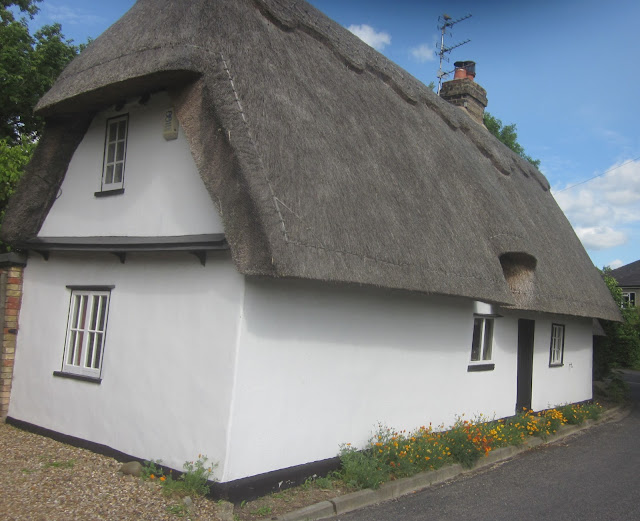 However, the pictures continue into town with the University Library even more in view.

Finally, Burrells Walk gives the last link into the centre. 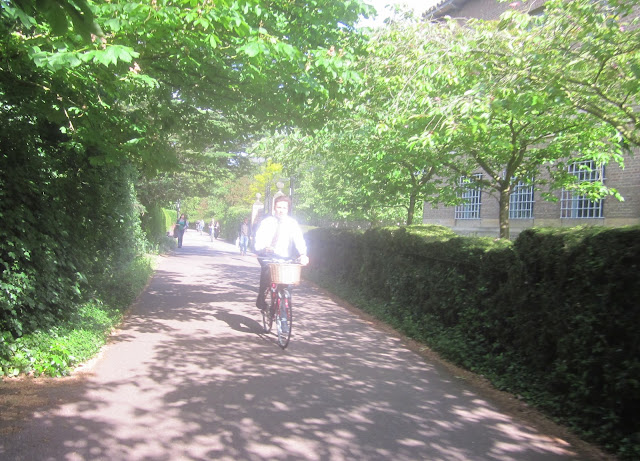 And on it, is that University Library that seemed so small a few miles ago. 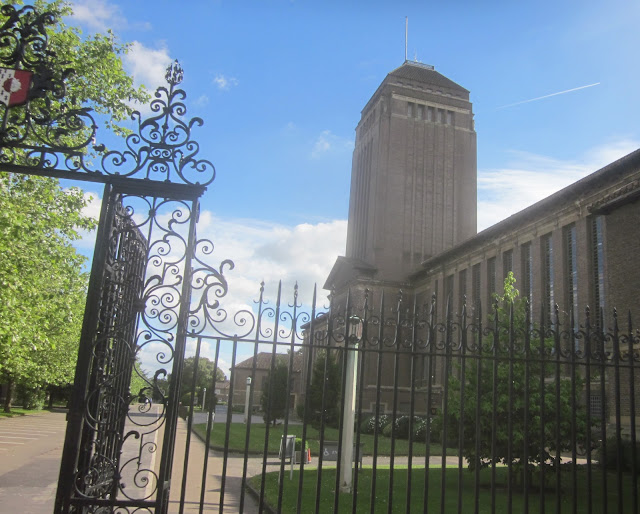 The route continues to the very centre of town along the very busy Garret Hostel Lane. 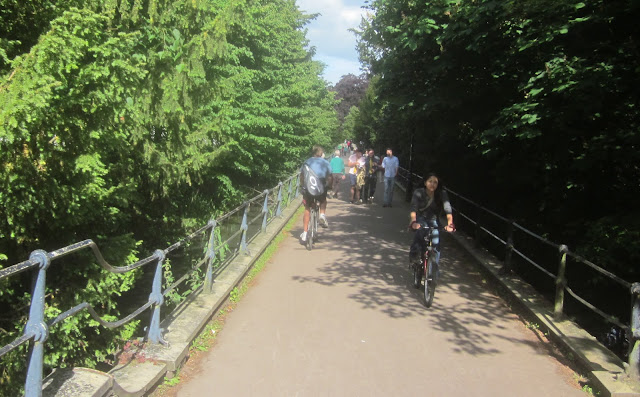 And over the very busy Garret Hostel Bridge. 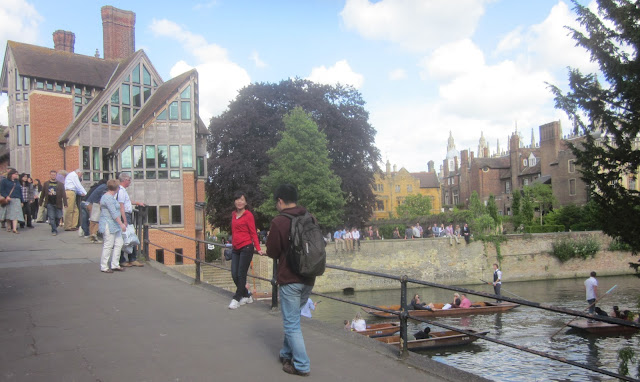 Finally, passing the Gates of Honour... 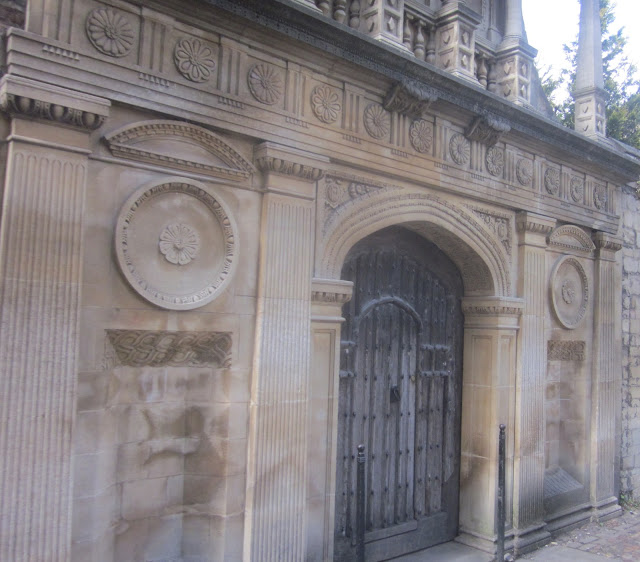 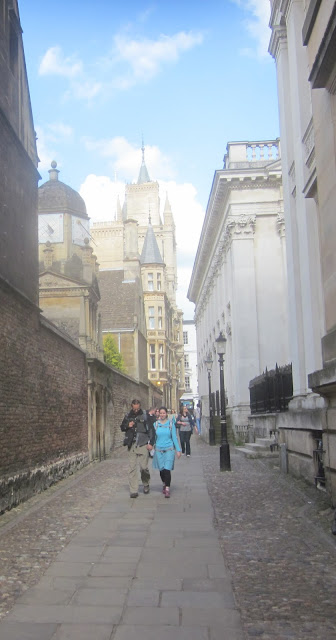