We left the chateau and embarked upon the short 80 mile drive down to where we were going to see the Tour for the first time. It was at a place called Vallon Pont D'Arc and where the last sprint of the day was to be contested.

We set off on the national route of the valley, as it was a nice next-to-the-Rhone road and the first town was Tain l'Hermitage, the centre of the Chateauneuf-du-Pape region. As we approached the town we got our first hint of the issue to come. The traffic was queuing out of town just to get across the central crossroads. Hmm, was it a crash? Was it market day? We decided to think a bit more about the Autoroute, then saw that it was very slow as well. Then, it arrived in our minds (French 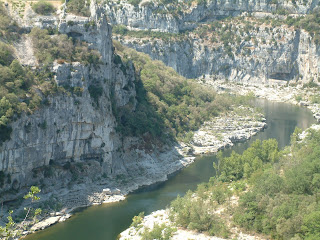 thinking!). This was the main Saturday for everyone travelling south for their holidays! We stuck to the national route until Valence where the jam going through town would be worse than the Autoroute. It did clear up, but we were glad to leave
the rush southwards and find our way to the begining of the Gorges d'Ardeche. We did have the luck of using this route to get to the stopping point, a 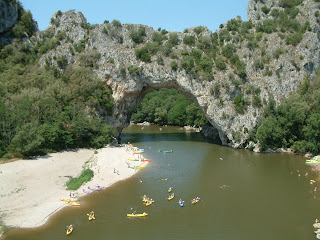 winding series of cliffs around the gentle river much populated with canoes and rather young people! Views were spectacular along 300m cliffs eventually arriving at the reason for the town name of Pont d'Arc, where a natural arch of rock, maybe 80m in height spans the river.


There was no sign of the race route right up until we crossed over it. Then the gendarme didn't want to let me back over again, vital for a quick getaway! We pushed, he relented!

We found a parking place about 200m from the roundabout. There were 2 German cars trying to park in the same little stretch and, despite there being plenty of space for all of us, once I'd nipped in, they shot off gesticulating wildly!

It was very hot but we found a shady spot and defended it. We defended it badly. The "rule" that you shouldn't stand in front of someone with a spot seemed to have been completely abandoned! People just stood in the road in front and when the gendarmes pushed them back, they just pushed us back without moving to a new spot. 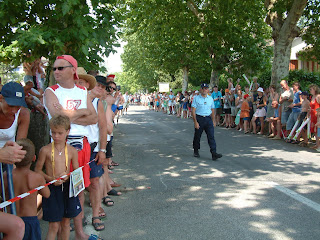 We were surrounded by Germans again, so maybe it was karma for the parking on some plan it didn't understand.

Suddenly 5 cyclists went past. We had no idea this would happen, they didn't seem to have half the motorbike calvacade that we know and expect. I managed to get a rather poor photo. Then back to waiting and being stood upon. Small town France seems a bit more rude these days, give me the mountains any day!

We waited a long time for the peleton, almost 25 minutes and as they passed i went for my trophy video placing of being right near the ground. There's lots of space down there and the passing bikes are really close creating a good level of excitement. So much so that I got a bit too close. One bike sent me reeling backwards, although simply through reaction rather than actually being hit. Video ends with a less than professional shot of the sky!

We extracted ourselves quickly after the race, a shoot through to the car, out on the road and pushing pedestrians out of the way our route back up the gorge. Quickly switched off the laborious route round the canyons and found our way to the top plateau. A quick stop at the nearest Champion, to stock up for the next couple of days. then on towards tomorrow's interesting country.

It was a great plan, except that as we wondered towards the eatern mountains, or as anyone not English will say foothills, the skies darkened considerably. It was black as night at 6pm. The skies opened and deposited what we expect in a year in Cambridge in about 30 minutes. You may say "Cambridge, that's hardly pushing it", but it was in 30 minutes!

We kept heading up through the north Provence "foothills" thinking that the tent wasn't up, no food was cooking, we still had nowhere to sleep, and, most important, I hadn't had a beer, with the skies still looking black as a Pathfinder supper.

Suddenly Sainte Jalle appeared. It saved us. It offered a damp but open campsite (several others were flooded). It was on the Tour route. It had a bar only 100yards from the tent. Luckily, the bar also did food. We ate outside under a canopy thinking this was the best of luxury compared to what we had planned in the weather. The French owners and waiters thought us mad to want to be outside in this rain, even under a strong tarp. The early food quite kept us in check, rather a case of a strong canape.

After a good evening, drinking the local wine from Mont Ventoux slopes, and watching Tour bus after Tour bus pass, we meandered to bed and the night took our dreams.
Posted by RadWagon at 13:52