Yes, up and at it at 5am, and those of you who really know me, know that it's easy to do! Cambridgeshire was bathed in this juxaposition of mist and sun that those to early summer mornings can only attest. Warm, wet beauty at a time were warm and wet should be made into phrases for a Catherine Cookson "novel" (just for Dom).

There was nothing worth speaking of through Essex and Kent except the ease of traffic which was a little less than forthcoming this time last year. It's funny how those two counties can either fail to please or fail to placate.

For God-only-knows what reason, the cartermaran SeaCat has stopped operating. It was quick, cheap, easy, always full And still failed. The channel tunnel is quick, easy, but bloody expensive. The ferry is easy-ish, cheap, but quite slow. So, we went on the Sea France ferry and found it quite okay. Load up time was good, travel time left enough for coffee, croissant, duty-paid, and a loo stop, and get off was very easy as we were 8th! So, despite some initial moans about that "darn slow" ferry, it all went okay.

We arrived in France a little bit later than we were used to, but set off down the Autoroute in great gusto. I don't know if I've mentioned the difference between the french Autoroute and the British motorway but it does deserve some discussion. We have far too much traffic and it doesn't pay for the privilege of travel. The result is Autoroutes are clear, everyone tries to move out of everyone's way, and driving is so much nicer than our 50mph car park effect!

It's been hot travelling. Hot enough for the air-conditioning to feel ineffective for the latter stages of the journey. Luckily enough the weather wanted to break and did. vast rainstorms overran us at Lyon darkening the sky and making all wildlife run for cover. It pelted it down with me rueing the decision to not take a waterproof because it's "only France, what can it do"! I'll see what the next few days bring if not a wet teeshirt or two!

We arrived at our destination at 6pm-ish. When I say arrived, we knew which junction to come off at, we knew which direction to go, but did we know the hotel? Hmm, oops! As we passed a sign, I vaguely mentioned that it might be then one we needed, then suggested that getting the hotel directions out of the bag might be useful. Up until then, it had seemed a pointless waste of valuable "hang pretty" time in the car. Yes, Neale, hang pretty, you could try it once in a while!

We turned round, and went up the track to the hotel. Out of a hilly forest this weird chateau appeared. It looked like a set from a particularly bad b-movie about things that try to come back to life, but never really make it. It was bathed in glorious early evening sunlight, thus removing the vampire theme quite easily. We strode into reception to be greeted by piano playing and gentle lapping light through ivy-drenched windows. 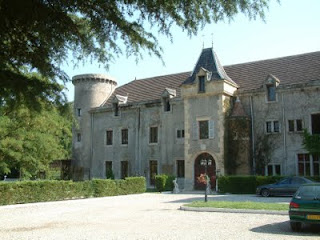 I lapped it up, leaned onto the desk and fluffed my French about "reservations", how cool. Just to add to it, I tried to eye up the piano player in a kind of "I know that tune" way only for the dog underneath to start raising all kinds of heel at that "weird large rucsac with 2 legs sticking out of the bottom".

Our room is in the middle of the serious Ivy-floe, giving us perfect photo opportunities from a wide car park and landscaped lawn. I say landscaped, it's more shaped with a view to finishing it off at some time in the future. It's not that the grass isn't there, it's just it looks incomplete, even with eveything in place. It's the wierd Romanesque figurine, the bizzare stone table in places that one might not expect.

In our room, the Tv didn't work, the shower wouldn't fix to the shower holder, the door wouldn't lock. We rued the fact that we'd failed to pack swimming costumes, thanks to the thought of freezing Alpine streams, when the 25m pool behind the terrace. However, the delapidated charm of this rundown chateau was hard to fault. Who cares about the TV and so on, when you're in a ruin! 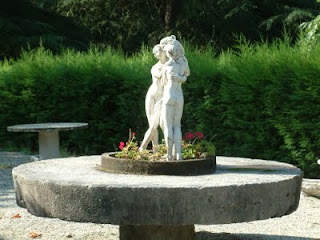 We needed food as soon as we arrived, but there was a hour wait for the restaurant. Zthey offered us drinks on the terrace, and supplied a little snack of hot puffed spicy pastries. Tables were laid out, so we waited for food service. None came. Eventually, we worked our way to behind the main hall, laid out for a wedding to find the restaurant in a fair sized room. No idea that this is where we were meant to eat, not on the laid out tables outside!

The food was superb, as you'd expect, and pudding was acompanied with a torrential rainstorm neatly supplanted by a thunder and sheet lightning display. We walked into one of the empty, dark conference rooms, bedecked with 17th-19th century furniture, to watch the display without unnatural lighting spoiling the view. The water was spectacular and looked to have taken the carpark in a matter of minutes!

In the morning we found breakfast the same problematic affair, no butter, bad bread, and no service! Notices showed some brilliant literal translations of which "Room liberted and keys rendered by 11am" proved the favourite! I had made that rookie mistake whilst brushing my teeth earlier on finding "C" is for for Chaud not Cold. It made the morning, and I'll definitely come back here!