Another bright sunny morning greeted us at 730am and a quick jump out of bed brought a beautiful view across the Gap-Lac de Serre Poncon valley.

It was a rest day today so no cycling, no rushing to get into place, no buzz of excitement waiting for cyclists to go up steep mountains at silly speeds!

As we were nearby, i wanted to travel up the road tha saw a defining moment on the 2003 Tour, where Beloki had a back wheel puncture at 40mph came off and broke his hip, and Lance Armstrong went careering across a stubble field to avoid hitting him. I thought I knew the road, so we went up it. Nowhere on the way up did we find the place. Did this matter? Not in the slightest!

The views across Lac de Serre Poncon, backdropped by rocky mountains, and pinpricked with windsurfers was worth every km up. The road wound round the mountainside beyond the top of what I thought was the route and along precipitous drops. The road surface being less than good meant each bounce took us nearer the edge. Heartstopping and not just the views!

Back down in Embrun we stopped and found breakfast and a l'Equipe. This is the first time we found out about the crash on the previous day, on the bit of the mountain that we had dashed down just behind the Tour. No wonder we were stopped for a little while!

We drove on up the valley, well aware that our second gas cyclinder was getting low. We had never seen that kind of cyclinder at any petrol station, amongst the many types they sell. We found an Intermarche, and decided to push for it.

First, stand outside holding the empty cyclinder looking stupid. Wait for the petrol attendant to point to the exit. Go to the exit and look sheepish, expecting service or something only to be told to go round into the store by a cashier. Now, stand the other side of the cashier looking equally silly. Eventually start wondering through the store looking for anything. Find windscreen wash and decide not to bother then turn round and find gas cylinders. That was hard.

On our way again, up the valley to oujr overnight destination. We wanted to stay somewhere up the Col d'Izoard, which at 2340m is the second highest place on the Tour. 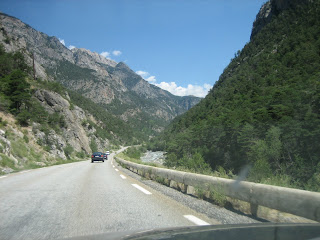 We meandered with the river (white water rafting here!) up gorges from 1000m to 1350m. Tunnels, bridges, overhangs, it sure took someone a fair amount of effort to get a road up here!

When we got to the junction at the top of this section, the sign said the road would close at 8pm tonight, which meant another right decision not to spend the night at a campsite in the lower valley.

As we climbed the mountain route out of the main valley, all of the early spaces looked full. We left the alpine pastures and started the zigzag of the final 500m ascent to the col. Every so often we stopped and looked at a spot. Eventually I got bored of stopping, said we're going to the top and coming down to find the first place. 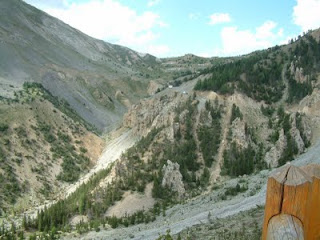 Then we hit the "Casse Deserta". It was a desolate, 200m cliff valley below and above with no room for a road, let alone any parking. However, we also knew that we still had 200m to go up before the top. 6 more hairpins and we were there, with stunning views across 2 landscapes. Not only that there was still parking space, and without too much effort camping space as well.

So, here we were. camping wild at 2340m. A good 800m higher than our previous record, and over 1000m higher than anywhere in Britain. That's almost twice as high!

After setting up camp, I threw my bike off the car and made a rapid bid to get to the "Casse Deserta". Not just that it seemed exciting and that the Fausto Coppi memorial was there, but 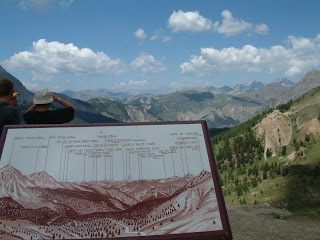 Alan from Sheffield had turned up and was attempting to bore for England.

We met him last year in the Pyrenees, but he didn't remember us at all. Something about spending all his time talking about things he had done and what he does and doesn't like.

The shoot downhill was great fun and cheered all the way. I couldn't get up to great speed as there were cars getting in the way. Flying round the Casse Deserta was just that. I was on the cliff side of the road, with a 200m drop just metres to the right, doing over 30mph. It felt like I was flying! 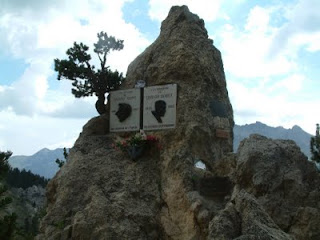 Then back uphill. Oh good God. Yesterday was nothing, this was climbing. The gradient of 8% was so much more. I was straight down into my lowest gear, being passed by fit cycle club enthusiasts, but still being cheered by the French who were now quaffing wine.

Once back, Alan had gone, only to return later. We got food underway, apart from the lack of good "viande". I moaned a lot, which successfully wound Lorna up. Then ditant rumbles of thunder. Lightning streaking the far mountains, an incredible display of dark and light, but no rain. Then the heavens opened for the fourth evening in a row. We had rain 1 day in the previous 30 in France, what was this 4 days in a row business! 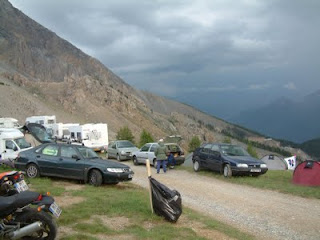 We retired to the tent, taking wine and good humour. The French in the camper van opposite couldn't believe us as we raised glasses at the and smiled, looking out into the storm. Well, it played back on us.


I felt a lightness of the bed and decided to sit up. As a put my hands down, it moved just like a waterbed. I sudden realisation that the tent was on top of about an inch of water, focussed our minds somewhat.

Rapid jumping out of the tent, and a quick slide up the hill, proved successful, and quite entertaining, I've no doubt! We lost our lovely completely flat spot to a puddle, appearing from nowhere and going to nowhere. If it was a clear stream gully I would have been remorseful, but no just a puddle.
Posted by RadWagon at 13:58