We woke to a still damp tent but with plenty of early morning gusto, coffee, tea, croissant, we were still off by 8am. Our aim to drive along the route until Col de Perty then find a good place to wait and jump and cheer when cyclists appeared.


As we left our saviour, Sainte Jalle, the mist disappeared and a stunning valley appeared. Lavender fields opiated our noses, purple etched our vision, and Provence filled our minds. We were only 15 kilometres from Le Grande Dame herself, Mont Ventoux. The valley floor swiftly dropped below us and a much wider vista supplanted, to give the full beauty of this part of France. A dry arid place, but with rocks, insects, and plants that conjure a joyful, warm Chadonnay with hints of rosemary.

After the first Col, we dropped back down and started the valley climb up to our destination for the day, Col de Perty. The valley just kept on rising, with the river keeping good tack until we got to the village of Ruissas. Ahead of us was laid out this twisting turning zigzag of roads up to the far summit: we had found the bottom of the climb. 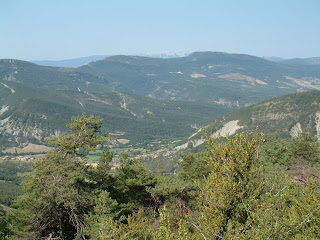 We soon found a spot, about half way up with lots of shade and a great view of the valley below. We were going to see them a good 10 minutes before they got to us!

The tempurature was already pretty hot, so we quickly stripped down to cycling gear to get the job done before it was too much. "The job done" entailed doing a climb. I cycled all the way back down to the village at the valley head, then turned round and proceeded to cycle back up the hill. Many people now question my sanity, but most realise that if a hill is there, it should be cycled up. I got cheered by all I passed. Anyone dumb enough to cycle up these things, that towered above me I really should say now, needs a bit of cheering. I got back to the car in 25 minutes. I was impressed. Lorna was surprised. I think she wanted a good hour more doing the Suduko in the French press. 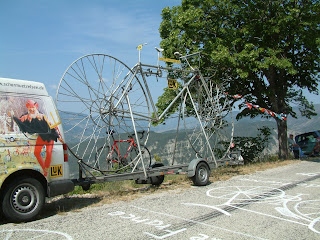 Lorna jumped on her bike and joined me in heading for the summit. It took another 30 minutes and more shouting, although this was mainly directed at Lorna, as clearly she was more deserving. I did get one "courage" from a French spectator, which I was mightly impressed with, it is the ultimate in Cheering support. 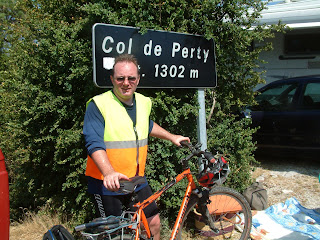 The top was 1302m, a good 450m above the village and gives me the distinction of having done a second category climb. I'd not done this before. A small tear slipped from my eye, mainly due to wind, and externally produced.

On the way down I stopped at the flag stall and bought a Union Jack. Not something I really thought I'd ever do, but there are so few English here, I needed to make a mark! I cycled done the hill the flag, a good yard in length, flying full from the handlebars. I got cheered all the way down, they'd never seen anything like it! It was magnificent! 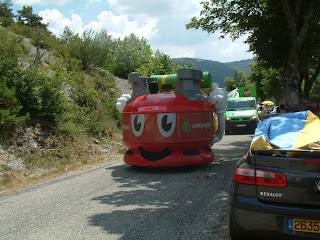 The publicity caravan was quickly there afer lunch. Again by our spot we knew everything that was coming a good while before it arrived. This time, we collected a king's ransom in goodies. Told you the mountains were better than the sprints!

After that it wasn't long before the helicopters appeared above and we could see small, slow moving vehicles, more commonly known as bikes. They came by in a few bunches. The first 6 riders appeared a good 4 minutes up on the main bunch. After cycling up the "hill" myself it was just outstanding how fast they were all moving. 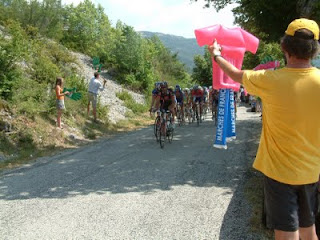 We waited and waited for the Fin de Course to appear, but no joy. Someone even started heading down, and were suddenly stopped as a final cyclist came up!

When at last the Fin de Course appeared, we were very cheeky and jumped straight on the back of it. We thus joined the Tour cavalcade. We were part of it. We were cheered up the hill by all the spectators, I slapped high fives with kids and waved to anyone, whilst Lorna hide her head in shame, not believing I could be so cheeky. We made it out of there so quick. The descent was scary, although we also knew that no-one was coming the other way, they weren't allowed on the road until 10 seconds before we passed!

On the way down the yellow arrows got us. These are the arrows that tell the Tour where to go. There is usually 2 to 4 at each junction and one every 5km along a striaght road, just for comfort's sake! ("Have I gone the wrong way? huh, no there's an arrow"!) These are highly sought Tour prizes and Lorna had to stop me jumping out the night before and taking them before the race had come through. Well, in my defense there was clearly too many up! Got a little worried about being spotted doing this and having to spend the rest of our lifes in a local police station just for the cheek of it, so bottled it.

But now we are after the Tour, albeit by 10 seconds, and they are free! The issue was whether we stop to get an arrow and lose our place at the back of the train, and leave a space for other slower motorists to pull out, or get an arrow. In the end it was no contest. Two quick stops and runs got two arrows in as many minutes, then we caught up with the train in no time at all!

One idea about this dash down the mountain was to get to the stage finish in Gap before the cyclists did. There was a good chance since they were going over another pass before the finish. Our dash down the hull was proving very successful for this aim. The first village ruined it. First, the turn off the route, to use other less crowded roads, was blocked. Then a local gendarme decided to stop all vehicles travelling through his village, for no apparent reason. We were stopped there for 5 to 10 minutes. Then, for no reason again, we were allowed on our way.

The next town was a traffic jam, which we just extracted ourselves and went to the next town for a bridge across the river. In a very short amount of time we did make the main route to Gap and speeded along to our goal.

Roadwork Traffic lights. Don't you just love them. We got two sets in 1km, both on red for a long time, with nothing coming!

Eventually, in Gap, after dodging through a couple of barriers we were stopped by the police, parked up and rushed down the straight towards the final sprint. Too late, the main bunch had been through. We did get to see some stragglers coming in with much cheering from the crowds around. 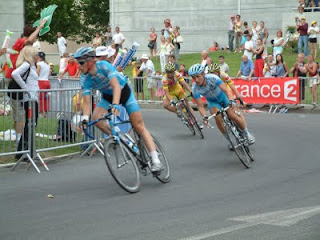 Out of Gap and heading eastwards to get a good pitch for Tuesdays stage, Monday being a rest day. We got a good 15km before the traffic really snarled up. There was a "Camping a la Ferme" signed on this single track road to our right, so we took it. It wound around up into the hills looking more and more like a road to the nearest quarry.

We finally arrived at this farmyard and the heavens opened again. I parked up and saw the whole farming/camping community sat in the open barn having a party. It took real courage to get out of the car with my umbrella hat on wander across to this crowd of 20-30 French people and ask for "une place pour un tente pour un nuit". I was laughed at unmercifully, but I can get away with it!

Eventually it stopped raining, we got supper done and looked at the stunning view across the valley to the start of the Alpes proper. This was it, the real hard climbs were next.