But then I looked through the "educational kit" material. Oh, it's for people riding only, with a few notes about how hard it is for people driving, because obviously they are the only people thinking about this. Hmmm.

Well, let's keep going. I was thinking there would be lots of "see and be seen" actions that are taught in #BikeAbility, about moving out and holding the right part of the road from an early position, about getting eye contact, about signalling, about knowing when you have priority. And how people driving respond to that.

But no, there's none of that.


There's lots of pretty pictures, lots of photos showing sharks have sharp teeth and cactuses have sharp needles. Yes, I hear you asking, quite what that has to do with cycling? I've no idea too!

The only bit that has any relevance to road cycling is a few diagrams showing where truck drivers can't see people low down. Yes, this is just a sexed up version of Exchanging Places.

So, let's just get this straight. A company that can design a truck so that the driver could see people lower than their cab, doesn't do it. Something in their control and THEY DON'T DO IT. They just tells others that their lorries are designed NOT TO SEE YOU.

To show you just how poor this response is, look at the way one truck company in Cambridge, the cycling capital of the UK, is working on this. Mick George is phasing in these lorries where the driver can see much clearer. 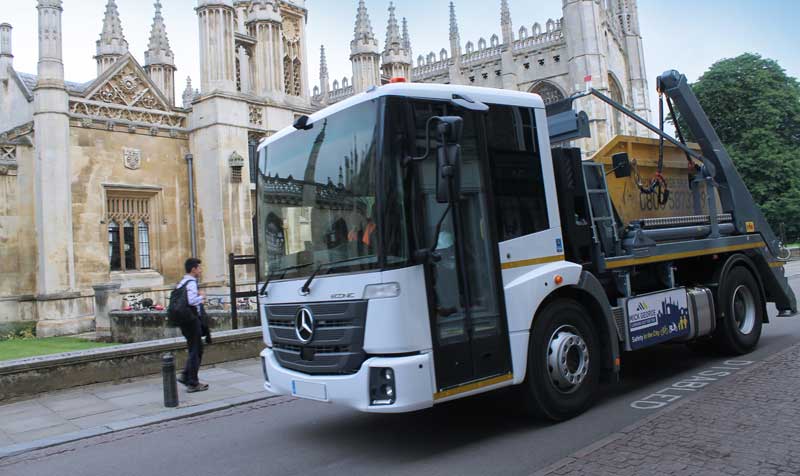 
The presentation is very flash, there are lots of very cool images and videos, although embedded in a Powerpoint presentation so there's no way of pulling them up and analysing them bit by bit. Then, to add to the confusion, they are all based on the European standard of driving on the right. This does get very confusing, and probably especially so to any child that this is aimed at. Why do all this flash photo and video stuff, then not get it the right way round for the UK? It's not hard to do!

So, onto the key frames that are important. Here they are in one diagram.

So, A and B are about people walking not riding. Let's knock them off for now, although they are also pretty ridiculous. C is a definite stupid move from someone riding. I'm not sure anyone disagrees with that and also it's pretty obvious. What's the education statement here? Even young kids know this. Don't move out in front of a large vehicle. Duh!

Then there's D and E. Oh gosh, I don't know where to start. The diagram at D is a classic example of just very poor driving from the LORRY DRIVER. How did they overtake, then turn across the rider? When looking at the notes, this is not what the lesson is meant to be about, the diagram is very misleading. This is meant to show a lorry stopped at traffic lights, then a rider coming up the inside (on the wrong side for the UK), then the lights changing and the driver turning to the inside (on the wrong side for the UK). Has the driver indicated they are turning whilst stopped? No idea. Why are there no lines on the diagram showing a traffic light scenario? No idea. What educational value does this have set out like this? Really, really not sure it has any the way it's presented.

And then E. Again, not very clear what on earth this is about. Looking at the notes, this is meant to be a quick lane change due to something going on ahead. So, this is ON THE DRIVER again. They shouldn't be doing emergency moves into vulnerable road users, whatever is ahead.

And, as a final point to the absurd, the presentation has lots of film of people mountain biking. What on earth has that to do with utility riding? And, just to push another irrelevancy, one section starts with the silliness of not wearing a helmet. YES, I'd use a helmet when off-road jumping and risky riding. This has no relevance to road riding. Go on, show me how well that'll go down in The Netherlands. The land of cycling that virtually no-one uses helmets because they are not relevant. Or, importantly, will do ANYTHING FOR YOU IF YOU ARE HIT BY A LORRY.

So, to parody Macbeth, this a a flash, pretty presentation full of sound and fury signifying nothing. And yes, you need to look at the quote just before that.


What Should We Do When Riding?

Well, the first thing would be to not accept these dangerous lorries on our roads. They are designed dangerously. Simple. Another thing would be to press for places where people cyling and lorries do not mix. Again, design the danger out.

And, what's the positive thing to do right now? Simply put, read the Highway Code (221) that says don't ride up the inside of HGVs. Make sure you are seen by putting yourself in a position where you can see drivers. Look for mirrors. That's it. That's more than this presentation is about.

Further training, if you want it, is through #BikeAbility. This is so much more than this presentation. It involves quite a bit and teaches so much more. It's also taught to ~10 year old pupils in the UK, and around 2 million have been through it. Which does bring up another issue with this presentation. They are aiming it at 12 year olds. This is well behind the UK aim for training.

One thing can be said, there's no mention or visual image of hi-viz clothing or paint. I think Volvo got their fingers burnt when they did that little promotion a year or so ago. That's another story.


So, what's the final score for this? How much educational benefit does it have to people riding? Well, I think I'd give it a 1 out of 10. It does cover "don't pull out of a side road in front of a lorry".
Posted by RadWagon at 10:04