Recently I've done a couple of sessions work in Cambourne. Sadly, it's been a car journey as it's just felt a little too far for riding for me. However, I did want to look at the green lane route between the two town centres so decided to do a little exploring.

I've been this way before but never quite made it to Cambourne itself. This time I was determined and had a good look at Google maps prior to trip. Luckily I also looked at Cyclestreets as I'm aware that Cambourne is changing rapidly. Cyclestreets was a lot more up to date, thanks to lots of local volunteers keeping OpenStreetMap updated. Ordnance Survey are good on bridleways in the country, but useless in developing areas, they are just too slow.

The green lane route is not quite the shortest, that's following the A1303 and St Neots Road just to the north. It's 8.8 miles long, which is around 15% less than the green lane. However, the off-road cycle path gives up less than halfway to the destination, depositing riders on a horrible national speed limit wide road. Although the majority of traffic uses the dual carriageway, the remaining drivers often exceed the speed limit and the normal cycle road position are covered in debris and rubbish thrown there by many a passing vehicle. It's just a horrible place to ride.

Instead, the green lane to the south offers peace and quiet with glorious views across the local valleys and plenty of wildlife. Also, you're far enough out of the city for pleasantries between passing lane users. Give me that over the hurly-burly of the main road any day.

So, overall clearly this is quite a rough route. Once off tarmac or any kind of solid track the path becomes a bumpy dried mud and roots surface. With constant tractor use (it is farmland!) and some horse use, a lot of the mud can be churned up then solidified. Also, with drying/cracking and grassy lumps, lots of factors making it bumpy.

Anyway, starting at Senate House and going over Garret Hostel bridge needs to be done slowly at times. I'm rarely going much faster than people walking here, just speeding up a little in between groups. I'm going at a speed such that I can always stop before I hit someone. Obviously this can be frustratingly slow at times, but needs must.

After passing the university library on Burrells Walk, the joy of open empty Adams Road followed by the big joy of the West Cambridge cyclepath. The surface here is lovely and smooth and great for getting up to speed. Additionally, people walk on the kerbed pavement, because that's the natural place to do so.

Along the path and on towards the motorway, there are several places where people can in and out of the West Cambridge Campus. I'd think that the path may need to be expanded all the way along here if there's going to be an increase in people using it to get here with this development.

And then the motorway bridge. It's in dire need of repair. Luckily there are warning signs. It looks like the constant pounding of traffic along the motorway has caused the earth ramps either side to start collapsing.

Still on a nice tarmac path, albeit becoming a little worn, and Coton Village Green springs into view. Ah, a fete is in progress. An excellent way to get here by bike then rather than the frustrating wiggle around by car!

On through Coton and out of the other side onto the Whitwell Way path. No more tarmac, as we're on a farm track, and it's pretty rough going. However, it's also where the views are just splendid.

This is where a decent surface could start to make a difference. However, I can see difficulties arising on how that would work. There needs to be space for tractors and horses, and they don't like the nice smooth tarmac a good cyclepath requires. However, apart from a few parts, I'm pretty sure that this is all possible. There is no one single solution, each section needs to be taken on it's needs and considered. Once out into the open fields, where the views really open up, there is loads of space to do something specifially for riding. 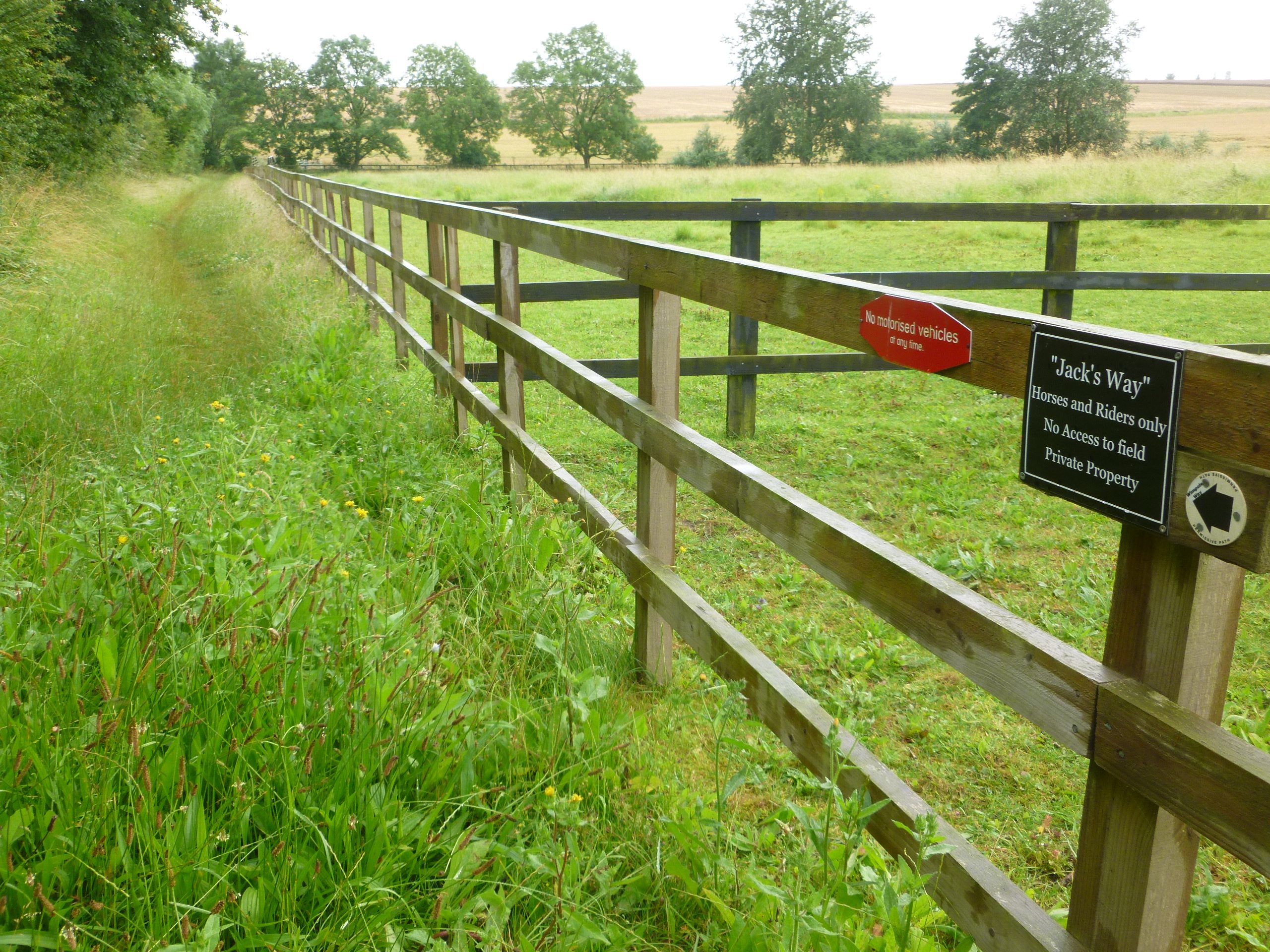 Crossing Long Road north of Comberton there's a permissive path which is claimed isn't usuable for cycling. It looks like it's being used by people cycling (albeit a bit awkward at the road link) and doesn't have "No Cycling" signs just a "Horse and Riders only" sign. Well, I'm a rider! I've been told that this path was added after a horse was killed by someone driving along the road here. Luckily the rider was only shaken, but it does show how dangerous this dead straight road is. A very sad event.

Turning away from the road and the path goes up the biggest climb on the route. Along with it's increased roughness, this is the tough bit of the journey. Again, there's space to do things here. At the top, there's great relief of a shady smoother section during a wiggle round the further easterly tracks. 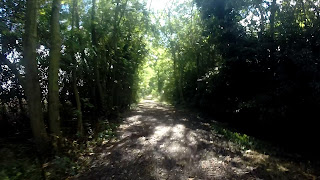 Shady Section to Hardwick by Me

Finally the path end appears. This is the end of the longest section of off road and marks over halfway distance wise and around halfway timewise. Just clipping the southerly end of Hardwick, the wiggle to the south (again!) is very little distance by road before the next section of farm track. Again, stunning views abound as the vista for miles south is spread out to the left.

In Caldecote, I decide to go along this odd section of cyclepath. It's right up to the roundabout then turn back on myself. Essentially it's some high quality design cycle infra next to the road through a new development. Sadly it just stops at either end and clearly isn't used very much given the state of the overgrowth.

And onto the final section of rough off-road heading towards Crow End, the top end of Bourn. It was great to hear children playing in a tree house here. There seemed to be quite a number having quite a laugh. And all ages and genders there, clearly enjoying being outdoors.

This path narrows in sections and in the dips there's the remainder of several gravel water traps. Clearly those who put these in simply didn't think people would cycle here. The first time I crossed them they offered a good chance of losing a front wheel into them. Luckily they have started grassing over and have become reasonable to cross.

Just before the concrete track appears, the route starts heading south west. This is just where the route really could go north west as the entrance to Cambourne at Monkfield Drive is just half a mile away in that direction. Instead, it's 1.5 miles round along this track and back up the Braodway from Crow End. 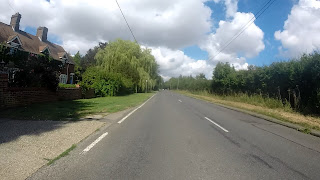 Broadway, Crow End by Me

The road from Crow End in Bourn is around 0.75 miles and is clearly the least pleasant section. I was passed by six drivers in total with one coming far too close without any reason to be further away, suggesting they had no idea what they were doing wrong. That's not a very good ratio.

At Monkfield Drive, a good sized track heads directly towards Cambourne. This is a track for a pre-Cambourne house that currently resides on the south east side of the town. Just before the house, a gravel path splits off to the right. It wiggles round a few trees and a lake.

There are several paths here with lots of "FOOTpath" and "No cycling exit" signs but none saying which way to go. Essentially riders here must know where to go or they get lost. This may be that I was navigating through long grass with little view of alternative paths, but it seemed like a minefield of "no cycling", where the map had said it'd be fine.

Finally the first road in Cambourne comes into view! Again, it's less clear as to where to go, but I'm going to use the road as it's quiet and short distances. I notice that the cycleroute does go off-road through the residential area, but on three road crossings and through driveways. So good for under-8s and avoided by everyone else. Not good cycle infra.

Then I picked up another off-road cycletrack. Again, this is good as it get's me where I want to go in a reasonable direction. However, on the way back it was just too small trying to share with someone walking. 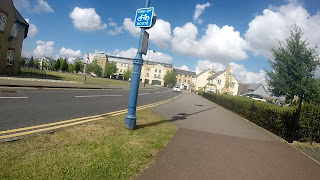 End of Cycleroute by Me (actually it continues to the right)

Finally, that track ends and I can see the centre of the town where this path is taking me, but there's no drop kerb to get me back on the road. Then I spot it. Rather than going towards the town centre I should have turned away and got onto the road in the other direction. How bizarre. I looked at the map later and it showed there was an alternative route avoiding the road by going the other way, but no signpost. Again, you need to know the place to navigate it.

Cambourne is a very good development in many ways. Lots of open spaces and wildlife preserve. Lots of curvy roads automatically slows people driving down, without it being noticed. No straight roads is a great way to make sure people find it pleasant to move around town actively. And that it's got lots of cycle infra away from the roads is great.

However, two points really let the cycle network down. Signage is vital in this maze. It really didn't exist, which means stopping every minute or so to make sure the direction is correct.

Then the geometry and consistency of the shared-use paths make it difficult to use. Narrow paths cannot be shared with people walking, and they are too narrow regularly. Also, having the route wiggle around the road network is a massive weak spot. If it's made so difficult to use, people will make up their own desire lines. This is likely to either include using the road, which then reduces it's appeal, and/or cutting across places where cycling is not wanted.
There's a more in depth discussion, albeit slightly old, about the town and cycling here.

The return journey is filled with similar experiences. A few notable exceptions are:

This route is 10.2 miles or 16.3km long. It took me almost exactly an hour to do the route out to Cambourne. Now that does entail 76m of climbing, starting at 14m above sea level and ends at 71m (so there is some downhill too). Note that it took me 53 minutes to come back into Cambridge. That did include having a goodish breeze behind me, but not too strong.

Interestingly, compare my cycling speeds to the 45 minutes I allow when I drive to Cambourne. Suddenly, my cycling speeds are not far off the driving speeds. I can imagine people simply not believing this. However, when driving I do need to factor in that I might get held being part of a traffic jam and I do need to find somewhere to park. Both these things do not come into cycle journey planning. And take note that if these tracks are well surfaced, they'd be a fair amount quicker.