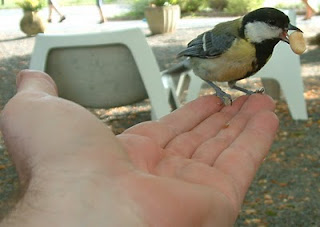 Well, where does one start with a journey like this? I've done it so many times and yet sometimes don't know it at all. There's a level of boring mediocre stuff, as you shall find, but wonderful little pleasures that light the way of life all along the way.

I'd better start at the beginning, the big bang. Oops, sorry, Stephen Hawking did that so much better than I could ever hope. My version is to do with 430am. Just let those numbers sink in for a moment. Savour the aromatic flavour of those digits in all their meaning. I know them well. I know them as a time after a good summer party, wandering back through a brightening dawn chorus with happy thoughts of a time well spent in happy company. Today, we watched "them".

Those were the people that starved us of our rightful place as the party spirit as they passed us by. They'd stayed up where we'd gone to bed. They'd engaged in bright discourse while we snored. They .... had no concept of the joy that is travelling at the very brightest best time of the day! I wish I knew what it feels like, but mostly, I guess, like "I wanna sleep"!

We'd planned the journey to the Eurotunnel in minute detail. Which is why we got there 1 hour early. There was nothing minute about it. Ah, the jams that didn't exist. We got a train 30mins early & got a breakfast break. Or is that a fast break fast?

Who can say much about the tunnel? It's a tunnel. It's black on the inside. The only bizarre experience was the shenanighans that was made as people tried to use the toilets. First, there was the queueing etiquette. How to stand next to our car whilst not jumping from foot to foot in a gap 10 inches across. Then, there was the weird way people had to work out how to get to the place. One can't get between the cars, so if you end up stuck opposite the loo you had too make a journey up and down the carriage just top get a mere 6 foot. I tell you, it's not a proud sight when relief seems so close!

Out the other end with no hint of farewell, the autoroutes of north France beckoned. It's always a bit disheartening when you drive for ages and finaly get to see the first 20 km tick by and realise you have to do that another 40 times. Boredom!

The A86 is a bit like the M25 only about 20 miles further into town and hopelessly twisted. It's effectively the only direct autoroute from north France to south west France and it goes through Paris. It's the reason why they spend so much on their TGV, because you cant travel down the road. This country is seriously lacking in a coherent motorway structure because of this inherently rubbish connection.

After a good 20 minutes moving at 10mph the route towards the periferique opened up. This is like the north circular only 10 miles further into town and crowded with junctions. We gaily abandoned the slow moving A86 and jalopied down the 2 km to the jam to get onto the periferique.

Signs above warned us. We checked their warnings on the map and calculated we could do the 85 percent round counter clockwise faster than our plan clockwise. We shook our heads, laughed, and followed our foolish plan. When we'd done half that distance in 40mins we, redfaced, found an exit back to the A86. It was moving. And stopping. And moving.

We left the south Paris suburbs about 2 hours after we arrived in the north, a good 90 mins longer than it should have taken. We were not amused.

I was so not amused I didn't stop until Orleans for lunch. That's like driving to Cambridge from London just for lunch. Grrrr! It was 3pm.

Luckily enough, after that it was plain sailing. Or maybe hammer wafting. I dunno! Cher & Indre are lovely, probably. Just nothing apart from flat plains of wheat. They did have a fantastic amount of windfarms. A majestic sight on this open country. I wish more people in the UK could see their inherent beauty.

After that it becomes more hilly. Lots of 5percent slope warnings and some wonderfully placed villages, water all around 100m directly below!

We got to our hotel in a sleepy little village called St Viance at just gone 6pm. Too late for a short jaunt on the bikes up the nearest ridge but a beer later, a walk into the village was fine.

Rural France is so unlike rural Britian. The commuter belt cannot extend far enough to cover it all. Vast tracts of France still work with the village as a serious commercial and social hub in a way long forgotten in the UK. We have our amateur societies and our church fetes. So many people work outside of that hub to make the vibrant local scene true to France all but disappear in the UK.

We lapped up the scene. Moved in it's waves. Filed it's returns, and enjoyed choking on it's unconstructed rustic. There was nothing constructed that needed destructing, it was already unmade. It was so filled with images that the original Impressionists sought 130 years ago.

Dinner at our perfect place happened. Perfectly. Outside under trees in a warm evening with cicadas singing. When it came to the pre dinner nuts, however, we found we had local competition, as the picture shows.

And after some nice wine I rather ruined the evening by making a terrible joke about examining trends and how that ends up with an old partner, a bit of leather and some fun.*

*ex strap elation
PS No one do the "bird in the hand" joke. It's mine!