And Now, the Time is Near 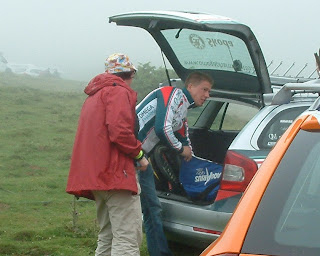 The drenchitude continued unabated. Timw and again the passing French had many smiles but mostly wishing us well.

My adaptation to this hard weather is to eat and do loads. But there's only so much walking to the Col you can do before the "I've seen that sausage stall" and "I've seen that cheese stall" becomes an irritating nag in your head. And the rain ensured that anything off road was verboten.

As the morning wore on, and Lorna got out of bed, the rain slowed. Then it sped up again as if to say "Oh, what was I thinking, this is fun". The caravanne was due at 2pm but we had plenty of early callers. Mainly as so few hardy souls had braved it onto bear mountain that they had 3 people to sell to instead of 300. Lots of youngsters bounded out of vans to wish us well, ask where we were from and then try to sell us a cape or parapluie. So much time so little people to sell to!

And so it was with the caravanne. Where we'd been screaming for stuff a mere wave got us covered in delights. Bar one or two vehicles, that were clearly shut for bad weather.

After the caravanne wew dropped camp, in about 20 seconds. Yet another Rad & Lorna team production of efficiency. Again, this brought on onlookers. Especially when the car almost drove onto the route. Zut Alors!

Whilst all this had occured a Rabobank team car appeared next to us, rapidly followed by a Omega Pharma Lotto. This were handing out bidons and gillets for the descent. We sidled up, like everyone else to see what was in them. Rabobank were doing warm bidons, something I've not heard of before. One very giggly girl eventually stumped up the courage and asked for one. After a quick count up, she got a bidon and a couple of caps carefully sneaked out the back without the hoards seeing. From there on blank refusals all round.

The race appeared. A few stragglers trying to push on up front, then the yellow jersey bunch full of all the main contenders, except Sastre, who appeared about 20 seconds earlier. Weird huh? I spotted and shouted at a load of favourites. Then the wait and more stragglers, of the usual kind this time.

Finally, the sprinters bunch. Oh, did they look like this was enjoyment personified, not. Looking back at my photos, I see that Cav was staring at me all the way past. Melancholy all over his face. Probably thinking "who is this weirdo shouting my name on yet another climb".

Lorna came into her full. The bidon guys were wrapping up so she fluttered her lashes at the Omega Pharma Lotto guy, camped it up big stylee, and begged for a spare bidon. He, quite overawed by the display motioned her in and slipped something out of his pocket. Lorna came gallumphing back with a X bidon, the isotonic drink. So, Nick, labs are open, we need to find out what it is!

Fin de Course, a few more cars and we were off down the mountain. The journey to our designated campsite, chosen because we knew they had a TV in the Accueil and would be watching the race, was uneventful. A few delightful side roads, the odd farmhouse, an unweildy caravan ahead, but nothing really very reportful.

So, we site on the banks of the Ossau in full flood after the past few days. I reckon I saw a kingfisher just a little while back. Good luck in this muddy torrent! Tomorrow night we hope to be half of France away, on the banks of the Loire. Another trip gets closer to the end and it's almost time to bid you adieu. Well, unless any of the other slightly stiff drivel on my blog is of interest! Yes, it's mostly cycling. No, I don't. I will if you think it's legal. I haven't ever.