(UPDATE: More routes and maps on this later post or just scan for Nidderdale.)

I'm up north in the delights of James Herriot country (1970s TV series All Creatures Great and Small) for New Year with a load of good friends, their adult children, friends of theirs, and generally loads of good peeps. This is the east end of the Yorkshire Dales in a delightful little homely town of Pateley Bridge. It includes the oldest sweet shop in England in a typically beautiful sandstone high street running down to the chocolate brown river Nidd at the bottom.

Today is the joy of preparing for tonight. As with a lot of days recently, spending the day just preparing for the evening seems very hedonistic, but I'm happy with it! Actually, I'm not doing very much preparing really. Only popping down to the rather good but expensive wine merchant on the high street to ensure enough decent wine and quite a bit of indecent stuff as well. However, with the day promising much snowy delights and the roads easily passable, the bike is calling! Dropping through town to check the shops closing time, and finding the surface absolutely fine for doing 25mph downhill it seemed churlish to go back up the hill again: so I didn't. I did find some hardy Yorkshire sheep on the recreational grounds.

Setting off up the Low Wath Road that goes past the main town school was also easy going. Plenty of grip underneath and a delightful snowy scene all around. Lots of 4x4s passed, many with genuine signs of offroad use and dogs in the back. Not something I'm always used to, but something very much partof this landscape.

I stopped opposite the infamous Silver Hill. This is it, going from the houses in the middle, diagonally up the the left and back to the right underneath the trees at the top in the middle.

In warmer times I'd cycle up that, but now it would be silly! 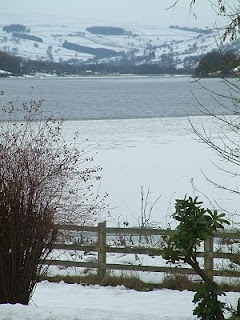 After passing the Bridge Inn and meandering up the valley past the hamlet of Wath, the georgeous Gouthwaite Resevoir appeared. This is slightly famous as it appears in the opening credits to the longeterm UK TV soap Emmerdale, but in a slightly warmer view to here!


It's a good mile or so long and topped and tailed by ice in the not-so-wavey shallows. The edge of the ice is broken up and curved against the damn with birds taking advantage. 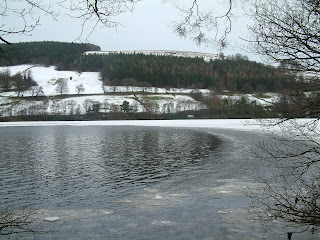 At the top of the resevoir lies the resty little village of Ramsgill. It's dominated in a rather bizarre way by The Yorke Arms, a Michelin one-star restaurant. This is in the middle of nowhere. The nearest big town is 45-55 minutes away on a quick day. But it's custom is good and clearly works on the business of being so good you will travel to it. And it's on the opening credits of Emmerdale as well. So, now you know which soap has a Michelin One-Star in it, and I bet you wouldn't have guessed if I hadn't told you! The food is exquisite, I will say, having been taken there just after my fortieth. And the wine cellar, ah, the wine cellar, sigh. Nuff said.

Past Ramsgill the valley begins to narrow sufficiently for the road to start to meander up and down the steeper sides and not far after is Lofthouse, the top end of my ride today. Just past Lofthouse is a rather delightful waterfall. 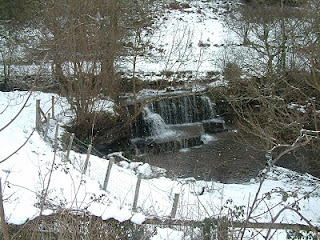 As you can see, it's already snowing up here. I did have to gingerly slide up a very icy, ungritted, and closed private road to get here. It's normally open to the public as it's got the beautiful Scar House resevoir at the top. But it's just too dangerous now, so lots of warning signs and I'm not going to attempt going any further.

The journey back down the valley was even more fun, as the roads generally went downhill. I did take a turn through Wath that got me to the bottom of the previously mentioned infamous Silver Hill. The view from here is spectacular. I did a composite image, which is not that good, but this does give some kind of idea about the beauty of this part of the world.

The route was simialr to my summer version but didn't include the east side of Gouthwaite or the top loop to Scar House resevoir. That would have been mad.
Posted by RadWagon at 16:29