A stream of twitter post pictures, as the evening cooking happened! I thought I'd fill in a narrative of the evenings mayhem. 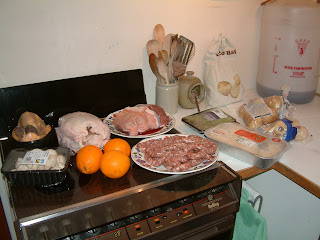 The meat and the vegetables that will go into the main meal. It seems like a smorgasbord of dead animal with a avalanche of murdered fruit an' stuff. The pork is rarebreed Tamworth pig from my local farm in Suffolk, which means less than a food mile for it. Sausages were killed 2 days before I got them and made whilst I waited. Now that's fresh!

Yes, the big vat at the back is the homemade wine. That was full at the beginning of the week.

#frys Non-trad pudding of Mango, Lychees, Kiwi Fruit, & Strawberries all in a gin/Madeira/orange jus (at 17:49) 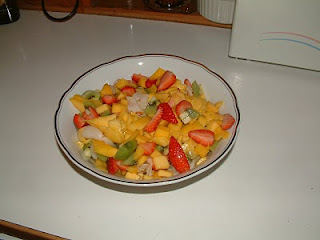 Yes, I know, it seems like a long time just to get a fruit salad together! By now the vegetarian nutloaf has been made, the meat all prepped and all in the oven. This was a brief restbite before starting on the final push with the vegetables.

Anyway, the fruit salad is a very good way of not having the traditional Christmas pudding, something that always seems to heavy after a large roast meal. And to really push the boat out, put as many food miles on it as your can. It's Christmas after all! The idea is to get the colours to force one to wear sunglasses. I think it works. 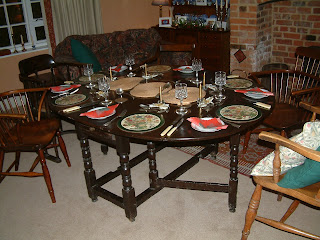 Whilst I've been slaving in the kitchen the others have made a fantastic dining space for a feast. 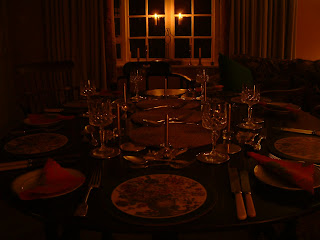 The flash photography never really gets the mood and certainly not the beauty of candlelight. This gives that if not the actual view. 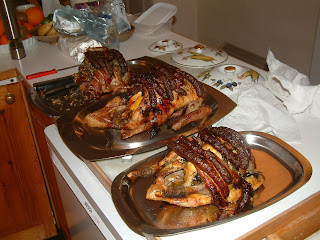 And at last the main course comes out to play. I used the sausages to keep the meat succulent which worked a treat. The fennel really does make a great seasoning for pork, which was beautiful all the way through. The duckbreast was a dark red all the way through, and fowl moist and light. Even if I say so myself, georgeous! 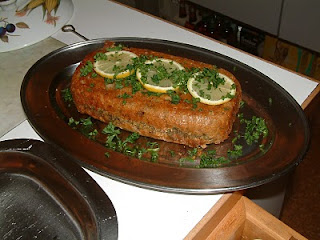 This worked as well. It was a lot of work but browned perfectly and fell out of the dish with amazing easy. It worked as a sustitute for meat in the meal, going with all the other veg just fine.
Posted by RadWagon at 00:18