May 2012 Update: New blog with different route and speeded-up video!

One of my favourite Sunday afternoon activities is a long ride into the countryside on the bike. I stock up with a salad lunch with bananas and chocolate to keep me going, and plenty of water. And the best of routes is a lovely little circuit from Cambridge south to Saffron Walden. What could be better than to take the past Sunday, where England play Germany in the football world cup and take to the empty roads!

I've mapped the ride here on my routes at Bikely.com. There's a lot of off-roading at the beginning as, unfortunately, there are few roads south from Cambridge that aren't quite busy. It's not too rough so should suit a hybrid bike as well. My Specialized Rockhopper copes absolutely fine. 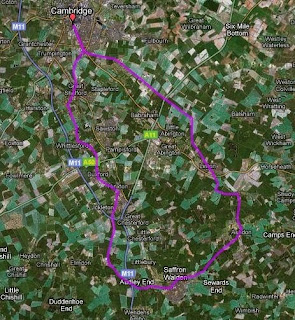 It's also not the flatest route. Although it's not the Yorkshire Dales or Pyrenees (see other routes for those experiences!), it's certainly not what most people think Cambridgeshire is like. At the end I've done over 400 metres of climbing. 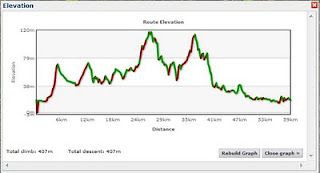 Coming out of Cambridge on Hills Road past Addenbrookes is well laid out for cycling with the railway bridge carefully designed and the on road cyclepath easily wide enough. Onto Worts Causeway and the traffic immediately diminishes, although not completely. And then the first taste of the hills to come. It's a nice little warmer that gets up another 40 metres giving great views across the city, although not too good on the camera as it's a very thin line of the horizon!

At the top there's a right turn onto a track which is the beginning of the Worsted Street off-road section. This goes for miles and is now preserved as a recreational space for walkers, cyclists, and horse-riders. It's gentle tree lined route gives a fantastic dappled outlook containing many species of flora and fauna. There are multiple signs along the route, although this one is near the Fulbourn entry under Copley Hill. The track back towards Cambridge shows the chalky look. 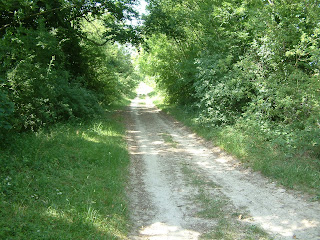 The route goes up to the side of Copley Hill but doesn't go completely over it. The hill itself sticks 15-20 metres above the surrounding countryside and is partially man-made. 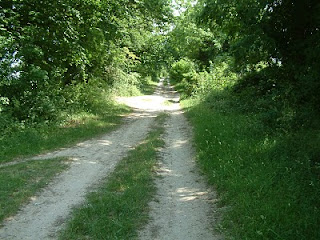 At the top there's a good view towards Meggs Hill across growing crops. 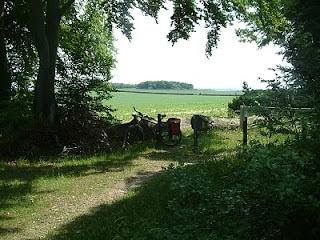 And the Mile Road Track south west is also a nice green route. 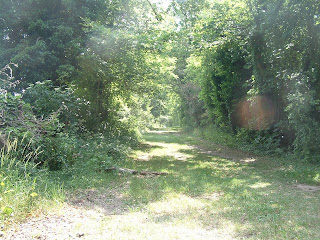 In the far distance on top of the hill is Linton water tower which, in around 30 minutes, I'll be able to see the other side. 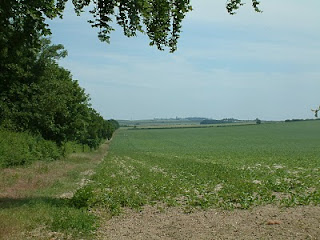 The track on south east opens out a bit and the trees get bigger with copper Beeches all the way to the A11 bridge at Worsted Lodge. 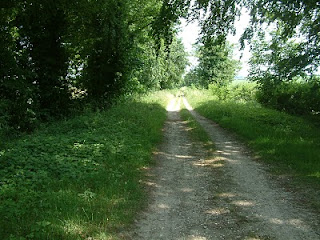 After Worsted Lodge. the track looses all it's trees and changes substantially. Now the open track affords views across open fields and the twitter of larks and swallows abound. A steady rise, over a couple of miles, makes to a good vantage point over the next few vales. Here's the view back from the Hildersham path turning. 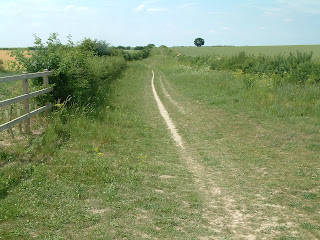 Next, the path towards Hildersham allows a bit of freewheeling as those metres gained can be turned to speed. I keep looking out for Red Kites here, as the small trees gives an ideal spotting point.

The road to Linton is quiet, and I realise that the match has been going on for a few minutes by now. The town itself has it's sprawling 1960s and 1970s estates around a small older high street. Passing a town pub, there were some glum faces. Ah, not looking good in the match.

Next, drop down Mill Lane, which is a small, easily missed, turn off from the high street. Here is an autumn picture of the tree just near the turning. 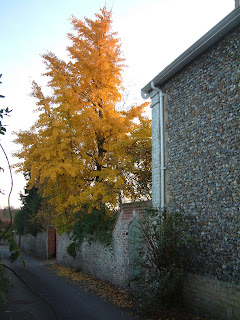 At the end the lovely mill building greets you and it looks like the end of the road. 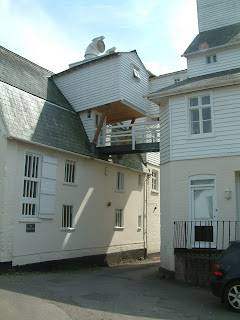 However, with a few moments search, a gap is found and you get to ride under the mill itself. 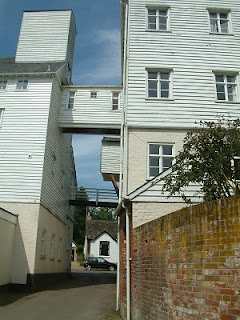 This allows access to the mill pond and river Bourn, which separates from the Granta Cam just south of Great Shelford. 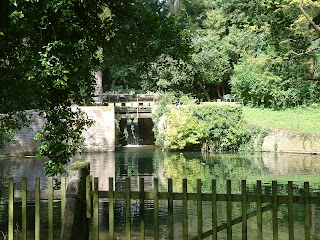 The sluice at the other side shows this to be the second pool and not the fed to the mill itself. However, this a great place to stop and have an early feed. This is just after the 10 mile mark, has taken 50 minutes, and is a good time for some sustenance. From here, the hills will kick in. 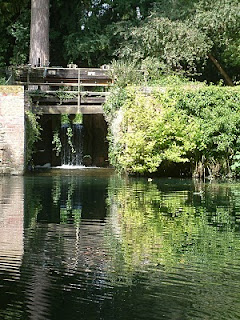 After a brief feed, it's time to head off to the other branch of the Granta Cam, er, the Granta. It's 10 miles away and involves just over 100 metres of climing taking me to my top point at St Aylotts Fish Ponds.

The route out of Linton crosses the nasty A-road quickly and takes up a back track for a bit more off-roading. Skirting a wheat field near to an old railway, bridge parapets still visible.


A photo of the trees in autumn shows a cooler perspective than today's 29 centigrade. 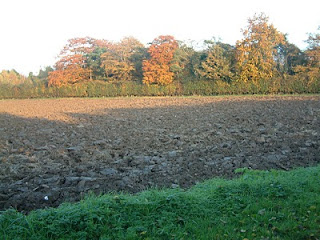 After a while the back road to Barlow drops back down to the river elvation. Some big cheering coming from a house suggests things may not be as bad in the match as Linton thought.

Now for the serious climb. Again, still following the river Bourn up through the village of Ashdon. It's a pretty, out-of-the-way village with allotments along the river banks in the middle of the village, suggesting a long tradition of locally grown produce. The river meanders south and the road turns slightly westward to climb the side of the upper valley to Church End, so called because it has, er, a church. At the bottom of the climb is the village is Ashdon Village Museum which today was hosting a farming display with many old tractors.

After Church End, most of the hard climb is done, but it's still a steady plod for the next mile or so. Eventually a short false top followed by the turn up to the St Aylotts Fish Ponds corner. Then relax, shake yourself down, and prepare for the descent into east Saffron Walden. Top speeds in excess of 35mph can be got. Unfortunately, it being so hot the road surface was very tacky. To the extent that the middle of my semi-slick tyres had changed to a darker colour with all the tar picked up. So, it wasn't as fast as in previous visits but still very satisfying after the climb.

Saffron Walden itself is a pretty town that got it's wealth not just from the local wool trade but also saffron harvests. On my brief run through I passed the church. This photo was from a previous visit. Unfortunately, what would be a glorious picture is rather spoilt by cars. 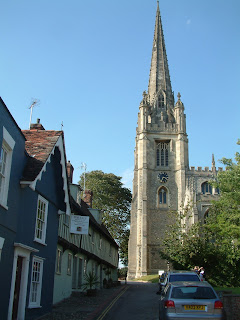 Here's a close up of the cottages from this trip without the cars or For Sale sign! 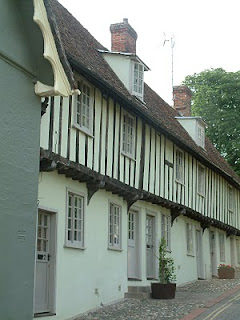 Dropping through the centre of town and back out past the Quaker's meeting house, another pub shows signs of anxiety, making me think that the Bartlow lot were over-optimistic about the match. A small climb out of town followed by a glorious descent to my lunch time stop at the bridge over the Granta at Audley End. 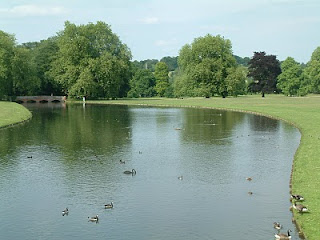 As it's Audley End the river has been landscaped. Which is fine unless you're trying to canoe down the river like I did when I was 11. 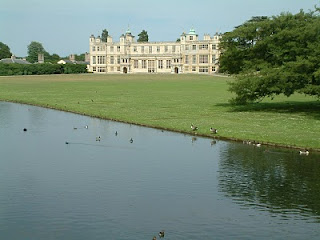 However, this did give a treat or two. The first one being a black swan, which is considered pretty rare in the UK. However, I checked my photos, and this swan's been around here for a little while! 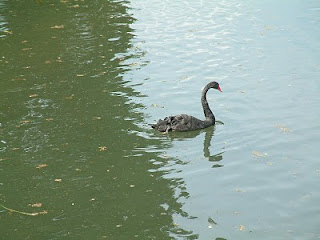 Of course, there is the other treat, looking in the other direction. Toot Toot!

After a brief lunch, I need to get on. The first little bit is a lovely short 10% rise. It's short but the legs have just relaxed and do not like this rude awakening. After a short distance of nasty A-road the turning up to Catmere End along Chestnut Avenue offers some yet more gorgeous back lane action.

Here's a photo of the autumn leaves. 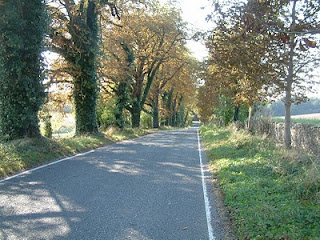 Looking at the map gives some cause for concern, after all there's a main railway line and the M11 just here. But, the road goes underneath all of this and looses a lot of the noise and disturbance of those thoroughfares. This shows both and they are pretty hard to see! 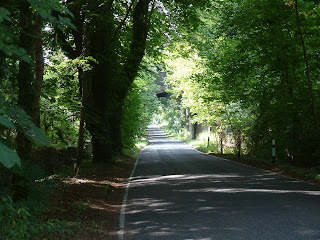 I remember many years of driving up and down the M11 and wanting to be on this road so much more.

The climb up to Catmere End gives better and better views as the trees drop away until, at the end of the village the views expand to take in everything back to Cambridge northwards. The road winds along the top of the hills here, for a couple of fantastic miles. 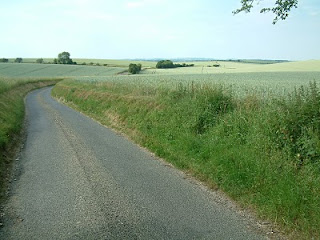 Just in the distance on the horizon can be made out the cranes that are building the new part of Addenbrookes. That's where I'm going! 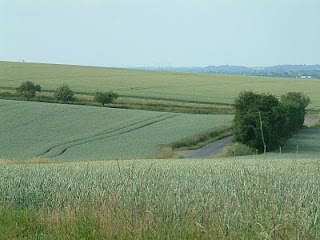 As the road goes along the top the motorway comes into view alongside and into the distance. It's a funny view, devoid of sound. Just this sweeping ribbon of movement. It seems very irrelevant up here. 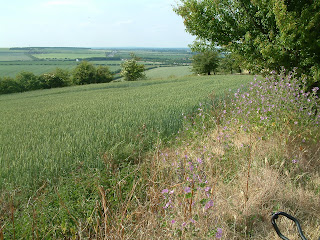 The descent from the hills on Coploe Road back to Ickleton is another very fast section, with 40mph not impossible. A great way to cross the motorway.

The legs are tired now, but that's all the big climbs done. Now is the valley tour, wobbling up the Granta valley back to Cambridge, traversing the river and railway level-crossings 3 times. There are lots of little corners all the way up here, one of which is the ford between Hinxton and Duxford. 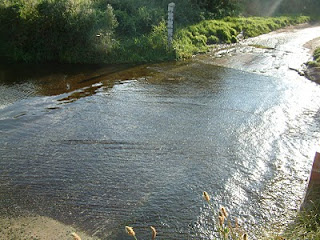 This photo was taken a a few years back where I did the foolish thing of attempting to ride through the water. Half way across I touched one pedal and the back wheel immediately slide away from that side depositing me in 3 inches of water at 15mph. I gracefully slid along in the water, creating a breaking wave in front of me and swept up onto the otherside, bouncing up landing on my feet. At this point I should have bowed to the audience of a family of 2 parents with 2 small children like I meant to do that. But no, alas, I wasn't quick-witted enough! Whilst I wrung my clothes out a car came along and nearly slid under the bridge down river due ot the lack of grip.

Then the villages of Whittlesford and onto the Shelfords, where legs appreciate a well-worn road and complete flatness. As much as this is nice, by now it's just about getting home. And passing pubs full of fairly gloomy people really does seem to answer the match question completely. Well, we've still got the tennis, cricket, and cycling to keep the summer sport going and it's not like England haven't done great in the rugby!

The final section into town along the Addenbrookes cycle path nicely cuts out Granhams Road over White Hill.
Posted by RadWagon at 12:53