So, I missed your vital update last night or this morning depending on how you take your nights. Here's the cycle-dominated run down of the day.

We got into Perpignan fine mainly as we were so early. We got into a car park that was round the corner from the finish. Not all were welcomed. There was a nice taped up home written sign suggesting that "Armstong go home, you're place is not in the peleton".

A bit of wondering around found all the usual people, kiosks, and vans. We found the main concession stand and just had to buy green the jersey. That way I can shout at our boy in green "I've bought it so you can win it". 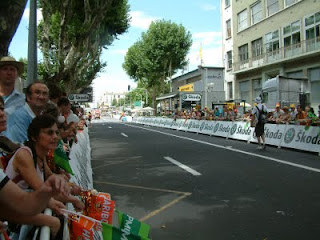 We had lunch in a nice cafe then straight back to the race. We'd eyed up a place earlier that was in the shade and only 175m from the finish line. It's the place where the sprinters finally get going on their own. People were now there, but we muscled in easily enough. Small children and old ladies are quite easy to move. 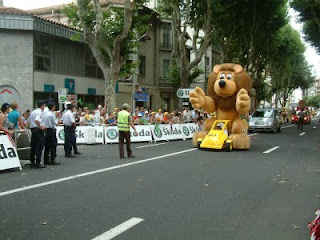 We waited for hours, constantly being shifted and shifting the crowd that started gathering around. Numb feet, legs, and arms are all part of the scene. The news kept being broadcast on French radio, which actually wasn't to follow. Eventually it seemed that little Tommy Voerkler was going to make good an escape, something he usually messes up. The French love him. He's pretty much the only French guy that does anything, so good luck to him. 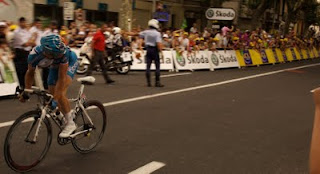 He cheekily appeared round the corner with 300m to go. The look of disbelieve on his face was palpable. He was going to make it. Then 2 others appeared, pedalling for all there life. And why became very apparent. A swarm of bikes filling the whole road, more like a giant wave about to break over the beach. The two out front looked very frightened and one got swallowed up as Cavendish won the sprint for the line after Voerkler and Ignatiev fell over the line from their breakaway.

I cannot emphasis the sheer scale and speed of the peleton during the final sprint. It was awesome. If anyone has seen any crashes of this bit you'll know the utter chaos that ensues.

After walking round the finish area in slight bewilderment and seemingly walking miles round to avoid blockages we found ourselves walking through the team buses. 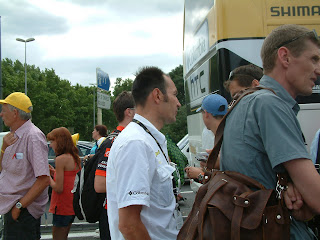 Said "Hello" & "Well done" to David Millar who gave a slightly bemused look then found Eric Zabel chatting away outside the Colombia bus. No sign of the Manx Rocket of course (Mark Cavendish for the unintiated). 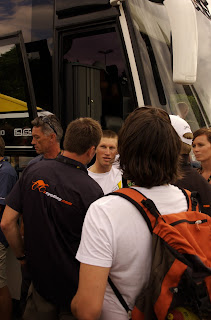 It was really late when the evening was done, hence the lack of update. Also, I was slightly overrun with all the fun of the day, and the sheer effort of standing around fighting the crowd to maintain one's spot.

Today's stage is in the heart of Catalan country. So, as I was trying to say yesterday night and in my best local dialect I'll say "bom nit".
Posted by RadWagon at 22:50