For those who don't know, Le Tour comes 2 me very different this year. For starters, it's a lot shorter (yes, breathe sigh of relief, after sharp intake of breathe on receiving said email). For seconds, it doesn't involve all that tedious camping around and dashing from place to place without any purpose than seeing that race. And third, it happens unlike last year's miserable failure (I know you were scanning your email during July thinking "it must start soon, surely, where's my out of the office option in Outlook").

Last year was without Lorna & too little planning to make it happen. I enjoyed watching it all in detail from the comfort of my flat. I cried a lot. I saw more than I would. My bones ached for the passible pleasure of no sleep whilst hanging to the rock face of some mountain waiting for the race, for the baking hot sun whilst sat in a car on an Autoroute going from market town A to market town B, for just the pure pleasure of using a campsites "facilities" after a couple of days finding a small bush with a trowel.

So, I am here. Well, where exactly? In a lounge with the gentle rush of a river down the hill, and the sound of a swimming pool being filtered just outside the door. 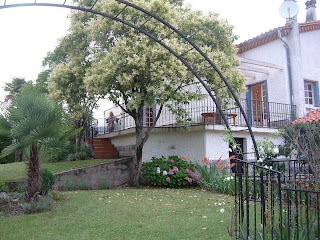 This time no mad dash down the autoroutes, no 5am alarm for the ferry, no strange hotel in the middle. No, this time a plane from Stansted all the way to Perpignan. So no custom specified bike either. It's all quite sad, but also good. As said, oh so different.

Landing at Perpignan was fun. In a "above the town at 500 feet" kind of fun. In the "I can read the newspapers on the stands of the sprint finish in the middle of town section in 2 days time" kind of fun. Town, plane, plane, town ... I think you get it. Then landing at a deserted field with tumbleweed bouncing along to the empty petrol tanker sheds, walking to the terminal and having luggage pass through the same door we did. Can I get a "Deliverance" from anyone? Or possibly a "good, bad, and ugly".

Ed was on a conference call in the carpark. The cicadas were going full swing so he was completely stuck in the car. I wondered torn between a vague life from the one 1950s style terminal building and the tree and rock covered mountains to the south west.

Once we were off, the surrounds displayed that typical scenario at 5pm on a Monday, as in totally blocked. We opted for the "get out of town onto mountain roads even if it takes longer" strategy. It was beautiful but mad as cars drove at us a twisting turning roads and Ed wasn't used to gears after a few years without so sounded like Lewis (Hamilton not Bear). This is also where I suddenly had sympathy for Lorna in her task as map reader. Why oh why do the French seem to think it's perfectly acceptable to draw the roads in a pattern that I can only describe as "Laura Ashley" flowery rather then how they actually happen. Also just scribbling a doodle for towns is not clever or funny, yes, Monsieur Sarkozy, I am telling you!

Unfortunately, there was the awkward confusion of being in Catalan. The language is different. If you watch QI you will know that just over 100 years ago there was no language called French. This is only to clear when you end up in places a long way 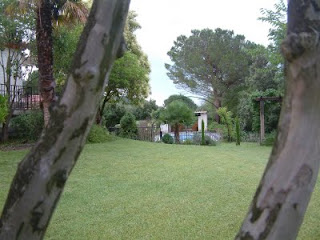 from Paris. People don't have the same words for things or even use the letters the same. I'm dreading my visit to the local Catalan-speaking vegetable grocer. I mean, French is hard enough, who said they could vary it and still call it the same? It does give a whole new meaning to Euro-centric issues.

Anyway, arrival was nice and we're on the ranch. No kidding, it feels like it could be a ranch. We could fit the main camping field of Haddenham here. It is lovely.

the place is on the edge of a village and on the edge of the river Tech. And edge would be the right word given how much garden slipped into the Tech a few years ago. 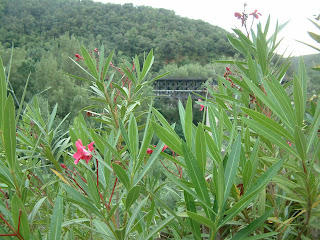 There a mountains all around a valley with views all over. The house is full of life, paintings, books, bikes, rooms, where the garden has all kinds of local plants, lavender, peaches, olives, roses, and a swimming pool and a shaded boules area. Books include Michelin guide shelf for pretty much every year since 1900. The garden includes a rather shifty salamander. As soon as I switched an outside light on, it was off up to the top of the house. And I just wanted to say "hello".

I seemed to have ended up at the lower part of the house with a bedroom, bathroom, 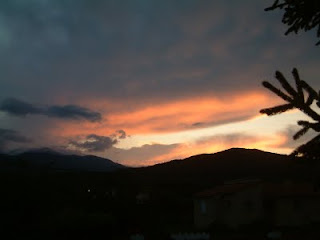 sitting room, patio, and bar to myself. I'm sure it won't end up like that, but I'm living like a king right now.

I repeat, oh so different.
Posted by RadWagon at 22:38