Over the past few days the Cambridge Video Guide has been updated with a whole batch more data including 180 clips in 10Gb of video footage.

The guide now has.. 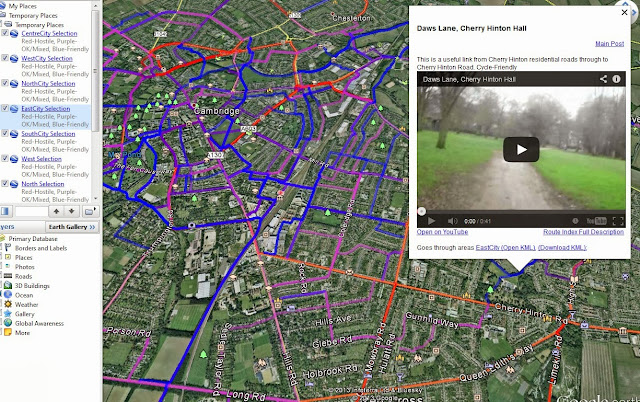 The descriptions of the routes have been shortened and quick links to relevant sections on how to ride round cars and people, and so on.

Also, the loaded video quality has improved, although it still suffers from handlebar shake. The handlebar mount enables a very precise direction to be shown, sometimes lacking with helmet cameras. However, it still needs more work to reduce this shake.

The street and route indexes have been split out to improve loading times, although the best way into the mechanism is using Google Earth to read the video embedded KML file.

Routes go further out of the town, mostly to the west and south. This starts to bring in thoughts about a south county wide grid of routes, thinking about a strategy for a 10 mile radius of cycle provision centred on Cambridge.
Posted by RadWagon at 16:13