I've got it on Bikely here. 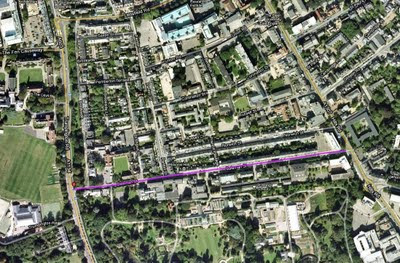 Sometimes I think this really ought to stop any through traffic in this area. It's difficult to get through at the moment, but possible, especially westwards along Bateman & Norwich Street. It's a residential area, why not bollard the roads to stop any cross-area routes.

Then, introduce a one-way mechanism for car pickups from school, keeping the roads two way for cyclists, of course. This has got to be better than the melée with two-way traffic & parking along the west end of Bateman Street. A circuit must be possible coming in from Lensfield Road, Brookside, and eventually down Panton Street.

A lot of kids cycle, it would be good to encourage more to do so. I suspect the car throng does not help this at all, despite some observations below.

I'm saying this even though I use Bateman Street in a car (at non-busy times!) to get through this part of Cambridge. I'd happily give that up to enable a better traffic mechanism in this area, prioritising local, low impact, traffic.

The big thing about this street for cyclists is the contraflow cycle lane, which goes for almost the whole length (aside from the two way sections at either end). This is meant ot encourage cycling around here and support kids going to school like this. However, there are quite a few issues with the scheme as it stands, which becomes obvious below.

See what you think of a couple of instances of cycling down it in winter at school turnout.


In some ways it's a good example of what happens when so much traffic gets together and shares road space. Everything is at 5-10mph, nothing is faster. This is probably a good thing, actually. It makes all traffic work to the lowest common denominator, not just be bullied by fast moving vehicles.

Of course, often there are examples of vehicles stopped in the cycle contraflow (a big no-no!). It's something the police have suggested they will follow up if clips are shown with identified vehicles. Needless to say, pizza delivery, taxis, and work vans are the most common offenders, but it has got better recently.

Here's a pizza delivery. It's so important to shorten the amount of walking needed as the pizza may get cold in that extra minute required. 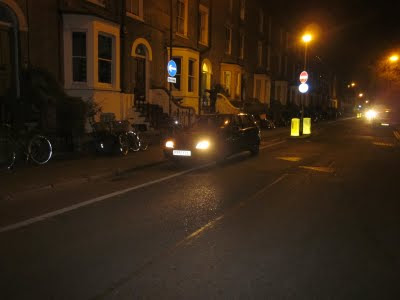 And in the snow, a lorry has to make a delivery. Now, I do have some sympathy here. What's the lorry meant to do to deliver here? 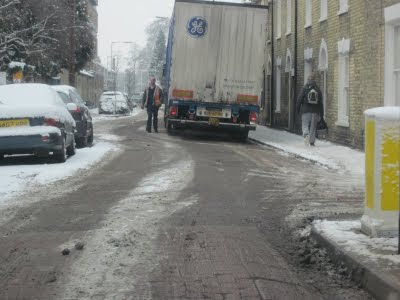 It just shows that we've been living like this (poor traffic models) for so long that we do not have the imagination to work out to use smaller vehicles for some deliveries. 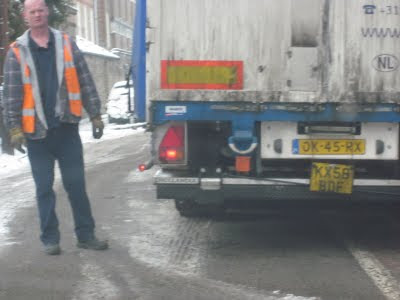 And here's a series of photo's off Cambridge Cycle Streets.

Parking in the cycle lane (not contraflow section).

Hmm, drainage not so good.

Roadworks in contraflow cycle lane. Just the ubiquitous "cyclists dismount" sign, because "you are not worthy of anything else being done to make sure you can get round.

Roadworks in contraflow cycle lane. Just the ubiquitous "cyclists dismount" sign, but this time completely incorrectly. It's a contraflow lane, coming from the other direction. No cyclists should be in this lane, they should be using the one-way road and have no reason to dismount!

Then there's the night time.


This starts in Hills Road, but does show the entrance well.