(UPDATE: More routes and maps on this later post or just scan for Nidderdale.) 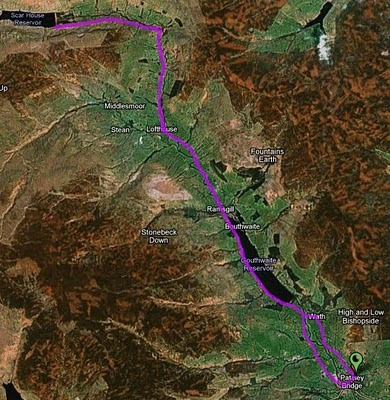 This route is almost the same as my summer time route but has, unfortunately, to remove the off road sections. This seems a bit chicken, but actually would completely destroy the fun of the ride and make it a hard mud slog. This would be fine sometimes, but it simply would be just a bit too far for me to do on a slow, winter's day.


Pateley Bridge High Street to Swimming Pool & School. The main high street of Pateley Bridge has a classic Yorkshire Dales look. I've done a more complete view from my last winter visit here. As always a joy to be here, especially as the snow has gone affording a reasonable ride up the valley to take place.


Near Wath to Gouthewaite Water. This is the last little bit before the main section beside Gouthewaite water. The reservoir itself is vaguely famous for being in the opening titles of Emmerdale, Britain's third soap. Today's water is considerably colder than the body shown twice weekly on TV. The ducks are stood on the surface, albeit covered in pools of just defrosted water. Vast cracks stretch across and up the lake as if a playful giant has been tapping their finger in various points across the expanse. And a dull mist hangs over and up the valley, keeping the small amount of warmth in.


Ramsgill. This little hamlet comprises a few small houses, and church, and The Yorke Arms, a Michelin starred restaurant. Yes, I did say, Michelin starred restaurant. I've often wondered what it's doing in the middle of the moorland of the Yorkshire Dales, well past the last town in the valley. The only thing I can come up with is that it's a beautiful little place to be! I have had the good fortune to eat here once, courtesy of my friends. However, the bill is not for the fainthearted.


Into Lofthouse from South. Lofthouse is the last village i the valley floor. There isn't much of the valley left and the next village, Middlesmoor, is perched on a outcrop of the medial moraine between the last two remaining valleys.


After Lofthouse, I turn up a non-public road owned by Yorkshire water which acts as an access road to Scar House Reservoir. It's a perfectly fine unclassified road but may not have permanent public access. The first bit has an water extraction point for the valley below, but luckily has preserved the small waterfall above. A delightful small fall that sets one for the remainder of the route up to the Reservoir. 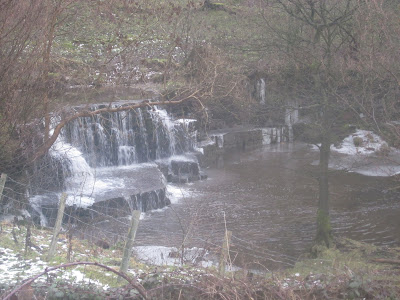 The route up is just a steady slog gaining around 170m elevation in about 3.8miles. This is only around 2.5%, but it feels a tad more! The rough surface of the road can't help. It's split into a northerly section, then a westerly section with the final half mile to the car park near the reservoir really taking up a lot of the strain.

The mountain tops on either side close in the first section and remnants of old mine workings can be seen on the top and along the valley. Turning the corner to the second section opens out again with the height gained giving access to the mountain tops themselves. Scar House Reservoir looks about as bleak as anything up here, with it's Victorian Dam and cracked ice surface. 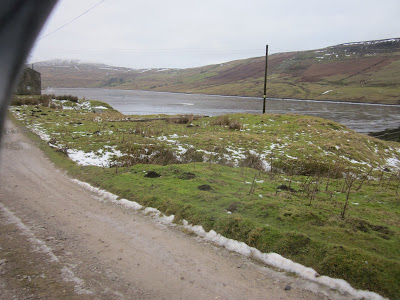 In the summer, I happily start up the tracks here and cut back across the moorland to the high village of Middlesmoor. It's an unforgiving track that would clearly destroy bikes of lower standard build. Negotiating rocks as big as coffee mugs whilst hurtling downhill is not for the fainthearted. And not for winter for me. There are sections where if you don't look out, you're suddenly 6 foot above the proper track and with 6 foot to stop before a sheer drop to it.

Downhill from Scar House Reservoir. So winter time means a straight reversal of my previous route. This is no bad thing and allows me the opportunity to do the fastest 3.8 miles I've ever done in this country. (Sorry, the Alpes and the Pyrenees offer much longer and faster rides!) The top mile is the joy and comes in at an average, even at this time of year, of around 30mph. After that it's a steady push all the way down. Although hat this time of year, with legs getting very cold on the descent, it's hard to maintain 25mph.


Ramsgill and Gouthewaite Water. A last section alongside the lake, taking in misty views.


Wath to Pateley Bridge up Silver Hill. And finally the back road to east Pateley, avoiding the climb in the town centre but pulling up some pretty tough ones along the valley side. Silver Hill, the first one I do, is graded as a 14-20% climb. However, that's only half of Silver Hill. The turn to the left at the top of the shown Silver Hill, gets you to the second section. Although it's not graded, I reckon it's 20-25% in places. It's at the edge of my abilities certainly. Well, the hard work is all worth it to see some spectacular views from the roadside of the river below.