Or why even good infrastructure doesn't get used


Yep, that's a bit of a mouthful! From Cambridge Railway station a full 2 miles south to both the Trumpington Park and Ride and, via a branch route, to the west side of Addenbrookes hospital the guided busway has been built along an old railway route. Next to it, a 4+ metre wide cyclepath has been installed. The route is quiet, traffic light free, with plenty of space for overtaking and passing pedestrians.

I can only imagine the general response from cycling types as "wonderful, sounds like you're living the dream in that there Cambridge". However, it seems to be hardly used. Compared to the cycle traffic along the nearby Hills Road there seems to be minimal numbers of cyclists on it.

So, why is this? I think there are several reasons, so let's have a look.

Some issues arise from thinking where people are trying to go. The cycle route has very little entrances and exits. This means cyclists can pretty much only go all the way along it. There is one public egress on Long Road. However, it's a 200 yard long east-west traverse, making it all but useless apart from a few houses towards the west end of that road. Apart from that, there are a few gates into private companies. These are usuable by members of the public going through car parks and so on. However, they do tend to be locked outside of office hours, and have lots of "Cyclist Dismount" signs. Not exactly useful.

Here is the route that goes in from the Trumpington Park and Ride to the Station. 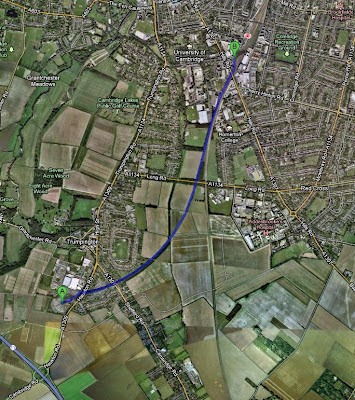 Yep, it looks great. And maybe that would help for drivers coming from out of town needing to catch a train. It sounds not unreasonable. Except that there are a number of train stations amongst the nearby villages, so very few people are likely to come into Cambridge to do this. It's easier to go to the village stations.

Then, just moving the destination a hundred yards or so to Hills Road, and the recommended route changes away from the cyclepath. 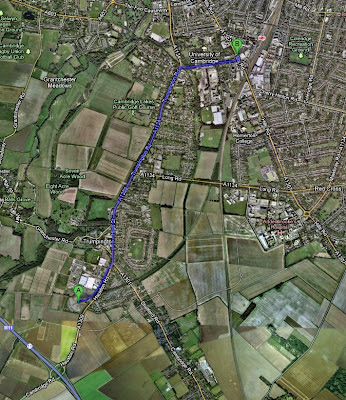 That's because, even with it's "smooth" curve, the cyclepath would be just longer. In fact, Hills Road is a good boundary. This extends up to Glisson Road, then uses that to Mill Road, and then to the west of Gwydir Street up to Newmarket Road. So destinations in about half of Petersfield are shorter along the cyclepath. To the west and north, it's shorter along Trumpington Road.

Mills Road bridge and the cycle bridge do make the west side of Romsey Town also good along the cyclepath. Again, this is quite limited.

Now, just moving the start a hundred yards or so into Trumpington, and the recommended route changes away from the cyclepath. 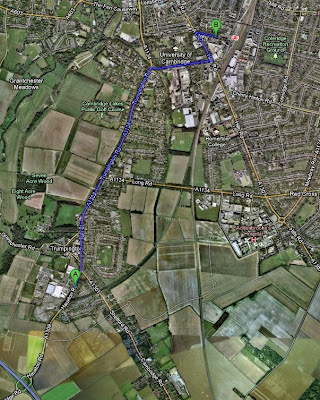 So, the relative small and quiet sections of town are served by the cyclepath, not than the rather more busy town centre (in orange). 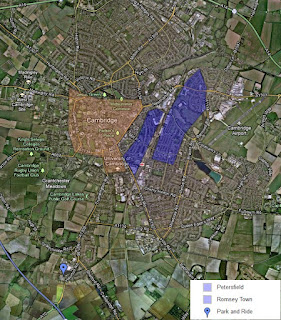 Ah, but what about that branch, surely that helps drag people in. Well, maybe, except that on a broadly speaking north-south route, the branch goes 500 yards west-east. 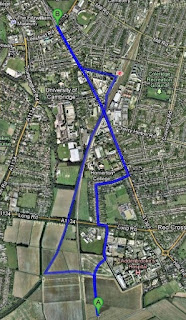 This means that a lot more routes are quicker than using the cyclepath. Even coming from Shelford along the great Sustrans cyclepath, which is the closest to the cyclepath, it would be preferable to cycle along a couple of back roads and Hills Road when going into town. The area of Petersfield that is quicker on the cyclepath is much smaller than above, and the Romsey Town area has gone completely.

I've been using Google Maps walking directions to calculate these areas. This is in beta so maybe not entirely reliable. However, I've also looked at CycleStreets, which is well sourced to calculate this as well. It essentially agrees, just is a little more unmanageable handling rapidly moving start and end points (it's still very good though!).


Here is the quietest, shortest, and fastest routes to Hills Road. 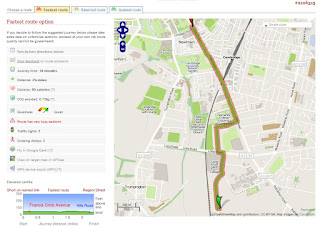 Going to north-west Petersfield does give a the quiet route along the cyclepath, but that's it. 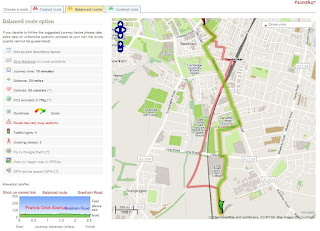 One suggestion by Cambridge Cycling Campaign is to run a ramp up from the cyclepath onto the side of Hills Road Bridge. This really isn't a bad suggestion. This would almost certainly add a section to the west of the Petersfield area, including some of the city centre, into the "closer by cyclepath" areas. This would take up a very small amount of space, possibly taking 3 or 4 parking spaces away from the company. I'd suggest it'd make a bold and strong positive marketing element for the company that did that. Having your name emblazoned across the local paper saying "we thought it was good for Cambridge" is not bad publicity at all.

This is where the ramp would start and head up, possibly turning to the left, to the darker bridge brickwork, possibly towards the left end of it. 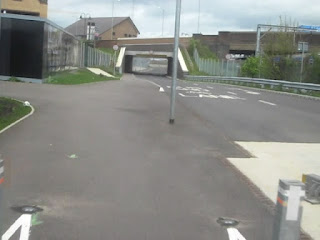 And this is where the ramp would end, towards the end of the darker brickwork. It would join in with the good cycle lane heading into town. 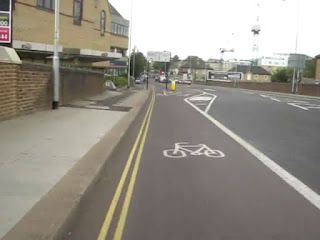 This would need to be a one side ramp, so only accepting cyclists from this side of the road onto or off it. I don't think there'd be much difficulty encouraging this. If coming the other way (so from ahead), it's much much easier to get onto the cyclepath by turning left (at the lights in the distance) and joining the cyclepath going under this bridge. It gets round the Cambridge cyclists notorious nemesis of having to ride up anywhere (for any height, whatsoever, including bridges!). Going under the bridge for that direction would be a much easier and more appealing journey.

However, for cyclists coming along the cyclepath and wanting to head into town along Hills Road it would nicely cut of a big corner, making it appealing for many more (and busier) destinations in town. At the moment, trying to go under the bridge and come back to Hills Road is really poor. It can't be done on the bike properly. Here's a clip why.

This shows that any cyclist ends up at lights that only allow a left turn back over the bridge. The only option would be to dismount, cross the road at the pedestrian crossing, then join in with traffic again. The phasing means that there is very little time for crossing within a full 100 second cycle. Most of the cycle is dedicated to traffic going over the bridge, hence the RAMP!

Here's a clip of what would happen instead (ironically ending in a red light!).

All I've talked about so far is how short the route is. For many cyclists this is the most important issue, just to get from A to B without spending any more energy than is necessary. However, not all cyclists think that. I don't.  In fact sometimes if the route is simply a few hundred yards further over a couple of miles, but is much more pleasant, I'll take that route. So, I do use it, despite coming up the Shelford Sustrans path.

I get away from cars, something I relish. Also, away from the trappings of cars, like traffic lights, which slow my route down. However, even then it's not made very easy.

The lack of joined-up thinking here is a real pain at times. Classically, the total route from Shelford ot the Station, just over 3 miles, is mostly two-way offroad. Apart from about 400 yards along Francis Crick Avenue. It splits across the large road into 2 onroad cyclelanes. No, I'm not kidding.

Ah, you'll be thinking this is a limited space place. No, surrounded by fields. Perhaps it was built a long time ago and it's not been updated since. No again. This was build a couple of years ago. Ah, perhaps they didn't know about the other developments. No, again. The Sustrans cyclepath pre-dates it and the guided busway sections were being built alongside it. So, why did they just not bother? Simple, no joined-up thinking. What is even more silly is that over the railway bridge (looking back from the below photo), the cyclelane IS two-way on one side, all the way to the next lights.

This shows just how ludicrously badly thought through this section is. Notice the vast amount of space to the left. Plenty of space for a 4 metre wide two-way cyclepath joining up the two longer sections. Although the side of the road looks nice and smooth now, it's only a matter of time before this gets strewn with debris from cars, and those drain covers look none too pleasant to catch a bike wheel in. Yes, this was designed in the past few years. 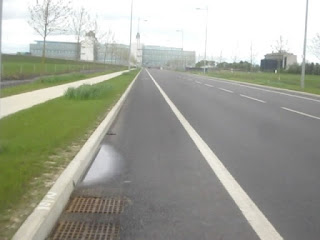 Going this way is poor, trying to go the other way is just plain idiocy.

Cyclists have to cross the road at the other end, luckily there are lights to wait at if working through traffic doesn't appeal. Well I say luckily, it's still a big waste of time compared to what could have been done here. Then, 400 yards later, when trying to cross back across the road to get back on the path, the route is effectively a 2nd/3rd (well, right) off a roundabout, taking a good extra distance round and forcing cyclists into a mechanism designed for cars to mingle, not them. As might be expected, the few cyclists here use the footpath or cross the road early to get in before the roundabout.

Yes, this is where all non-cyclists say "but surely you have to accept bad weather and conditions if you want to be on a bike?". And whilst I'm happy getting wet (as usually "cold" doesn't come with that) that's not the issue. Most water hitting cyclists, especially in Cambridge, comes from the ground, not the air. It's the standing water that splashes up that makes more of a mess than that which comes from the sky.

And this is where the cyclepath follows the same issue as many around which does not happen on the road. Today, I used the cyclepath about 10 minutes after a short shower. The spray coming up was a good drenching. It was not dissimilar to going through a 1-2mm deep puddle for over a mile. I got to the railway station and turned onto the road. It was completely dry. This wasn't because there had been a constant stream of traffic along it, drying out the road with repeated tyre wiping, I'd not seen a single bus. No, it's just down to the tarmac used and drainage developed. No thought has gone into draining the cyclepath in comparison to the road. Simply put, if that's the choice, many, many cyclists will choose the road. This is something nobody wants, really. So why not think about cyclepath drainage!

It's pretty simple, build it and they will come. However, you have to make it appeal. This is the basis of the free market that will pull cyclists onto the route constructed. Fail to think through simple things and it will not be used.

Making it easy to get on and off would be a good start. Just adding the Hills Road Bridge ramp would be a big step forward. Maybe connecting up across the open spaces to the paths and residential roads on the east side of Trumpington Road might pull people in and do more to encourage people from the Trumpington Road route.

Above all, joined-up thinking. Don't just put the tarmac down and just expect people to get on it. Think what would make people more likely to use it. And drainage would be one big thing!