So a few decided to make the trip up to the new cycleroute that has been set up between Stow-cum-Quy and Lode. This was changed from a Friday evening to a Sunday lunchtime ride as it was New Years Eve (and few could do the Friday slot!). It had the benefit of ending at The Shed, a new pub in Lode, just about lunchtime. Hey Ho! 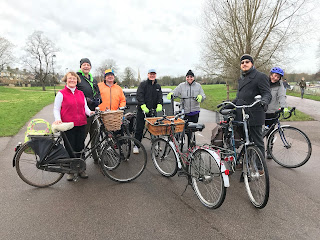 Setting Off (photo by Simon Nuttall)

Here's the route planned. A fairly simple jaunt along NCN51 out from Cambridge, which is mostly off-road, and when on- it's very quiet. Note that we came back along the road to the Missing Sock (another great venue), merely to see waht it was like (very quiet).


So to the route itself. It starts where the offroad NCN51 crossing of the B1102 in Stow just north of the A14 roundabout and makes it's way through Stow towards the Quy end of the village (good history here).

This first section can be a little intimidating. People driving have only just slowed down for the village and still have expectations of making fast progress. There are not many easy places to pass, especially with oncoming traffic. Why wasn't the off-road path started here? Well, probably for a number of reasons. Could it change, I hope so, although it may be more difficult to do so as a secondary change.

Just about where Stow becomes Quy, there's a turn off onto a small, quiet side road. It's still direct and makes for a nice relaxing change from the previous section. This continues into Quy Court Business Park, which also has slower speeds, although also suffers from reduced visibility and the likelihood of people driving not looking as they park.

After that is the off-road path itself. This is lovely. It starts off being separated from the road by a hedge, a great reduction in noise. Sadly, this doesn't go for the whole length, but it does do it's best and it's clear why it can't. 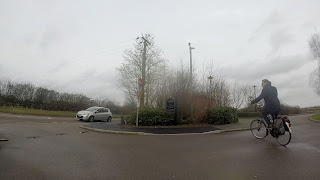 At the Lode end, near Anglesey Abbey, the route crosses back over th B1102 and then proceeds to the Lode turn. In fact the off-road path continues for around 50 metres into the village. From there it's a quiet ride down to The Shed. 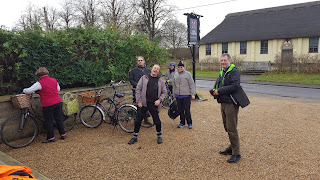 Arrival at The Shed


And here's the video of the route. A few glimpses to the route itself, then a quick look at the good (of which there's a lot), the bad (and there is a bit), and the ugly (thankfully none!). Look out, soundtrack!


So, the new path should be welcomed, it's a helpful addition to the route network. It should mean more people ride, although it's not really going to include quite a few people who really won't like that first road section. If it's to be a route, it's only going to be as good as it's weakest point.

So, looking at the road section, why wasn't it changed. Simply, it's quite difficult. However, it's not that difficult, and there is space. Sticking with the same side as the built route, and there is room most of the way. True, it means costly moving of lamp-posts and other street furniture. Opposite The Wheatsheaf, the space on that side runs out. There is still roadspace, so it's a question of moving the kerbs, again costly for cyclepaths. 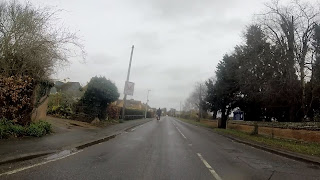 Could it be done later? Yes, I hope so. After all, we are just finishing up the same kind of project, with similar issues in Harston. And I'd suggest the idea of a quick win was the reason why this wasn't done to start with.

Once at the turning onto the quiet road, there's plenty more space on both sides. And this continues along the main road apart from a small section just after the crossroads. Again, some clever considerations here would enable this to be a fully linked path. Of course, the quiet road could still be used, which wouldn't be absolutely ideal, but would allow for some of the less confident riders. 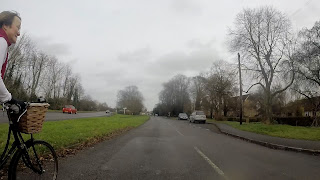 There are a couple of potential issues with the path itself.

First, in two places trees come close to the route. Has enough been done to ensure there's no root damage from the trees. We've recently suffered from this on the Guided Busway (yes, that short time and we have it) and can see many examples around town where this is the case. You don't see it as often in roads, why would that be? A better substructure? 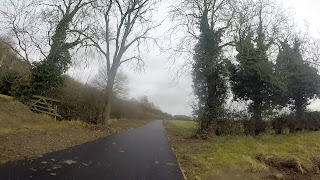 Trees very near path, has sufficient been done to stop root damage?

And second, There is at least one tractor crossing. Again, with several tons moving across the path, not too regularly, just enough, has the path surface and substructure been designed to deal with this? I'm not sure. I have seen what other places do to protect fomr this kind of damage, and it doesn't look like we've done anything like enough. 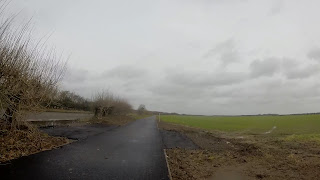 Tractor Crossing, is their adequate surface and substructure here?

So, onto the last section, the crossing and the route up to Lode.

After the nice section away from the road, the crossing comes at you quite quickly. It's quite difficult to see through the trees and work out when it's okay to cross. People riding do like a good chance to look around, see whether they can plan a route across and do it quickly without stopping. This isn't possible here. There is an island, but we were all too nervous to use it. It looks very small and there's a worry about being clipped whilst waiting. And if we want this facility to be used by lots of people, we need to make it so lots of people can use it at the same time, not one or two. 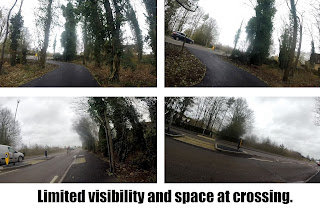 Finally, the path up to the Lode turn. This is well known for being the Anglesey Abbey overflow car park. Cars will litter this place at busy times. I hope some contingency has been made to deal with this issue.

Here is an example. Now, the car isn't parked all the way across the path, but it does take the whole space up. When passing a parked car, riders are taught to be at least an open doors width away, in case someone in the car opens the door. The Dutch Reach, as good as it is, will only reduce the numbers of poeple who do open doors without looking. It's still better to avoid the area when riding. 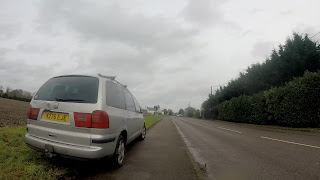 Finally, we did see the sun, if only for a bit and a bit muted! 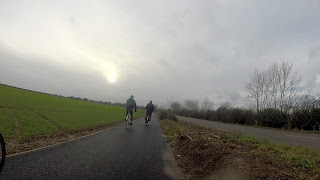 The Hint of Sun on Return

All in all, a lovely ride out, and I like the new path, with some reservations. Convivial chatter along the way and great food at The Shed made it all a pretty good New Years Eve.

Posted by RadWagon at 17:42 No comments: