The good folk at Outspoken Cycles (which as of very recently includes me!) set up to run Scalectrix bike races powered by, of course, actual pedalling. And behind, the big pull, free smoothie making again by pedal power.

Here are a few photos just after set up with people from all cycling backgrounds coming to join in the fun before the Tour route is announced. And yes, there is some genuine Tour de France paraphernalia littering the place. That sign came from Briançon during the 2006 Tour (swag picture and blog of the day). 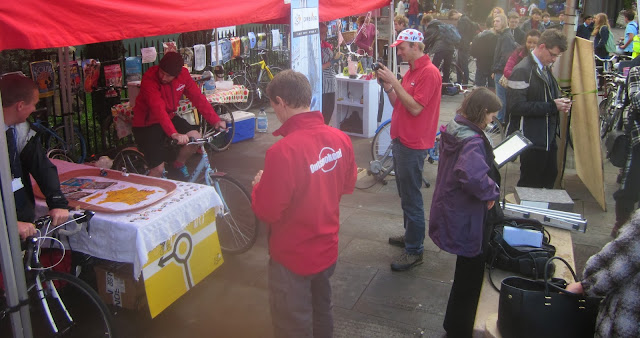 The racing was great fun and taken up by all kinds, see clip below.

But that wasn't the big pull of the stand. The bicycle-powered smoothie maker was a big hit with many more! In the morning it made a great diversion for those who needed a free bike check. Drop the wheels off with the mechanics explaining the joyous foibles of it's current state, then meander along to a bike on a roller and power through a few bits of fruit to get a free drink! 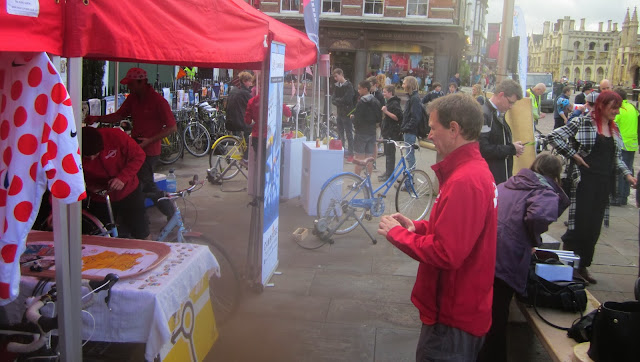 Both bike race table (mountains classification!) and smoothie maker stand beyond, but where are we?

This was all done whilst waiting for the official announcement happening just along the road in front of the world famous Kings College front. 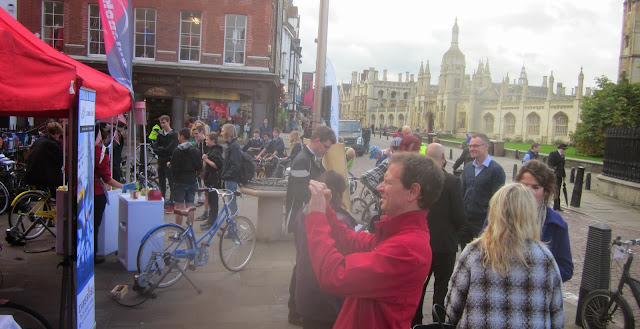 So, how did that fun go down? Here are a couple of short clips from the morning showing people engaging with the great idea of this fantastic race coming to Cambridge, bringing a wealth of tourism publicity.


Bicycle Races are Coming to Town!


Sooooo, now we know what to do during that wait for July 7th when the Le Grand Boucle does indeed arrive in Cambridge. Here's the Cambridgeshire Route in Cyclestreets.net.