National Cycle Network Route 11 goes south from Cambridge along the fantastic Addenbrookes cyclepath. Through the leafy villages of Great Shelford and Stapleford it joins quiet roads before crossing the main A1301 in the village and joining a shared path. This is one of the better ones, although it could do with a bit more space.  It takes the rider south crossing the river Granta (a side stream that turns into the Bourn) in a nice green space called Clerk's Piece and then on towards Sawston on the side of the A1301.

The junction to the north of Sawston is a bit of a disaster area. It's clearly been designed with the idea of making sure people cycling stop before crossing either road in some kind of hyper-safe manner, whilst clearly saying that people driving shouldn't bother their little heads with vunerable people crossing, and continue to speed along the road.

Here's a satellite picture showing routes around this, although I'd recommend looking at the map in Google Maps (and below) as it's much more interactive. 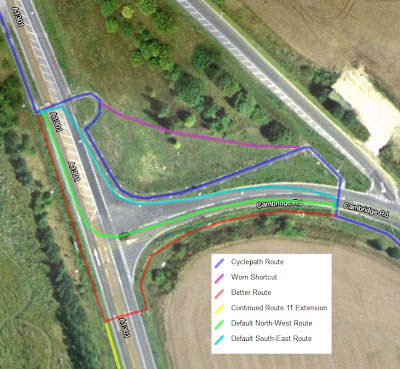 Notice the way that the planned cycle route follows a series of tight turns. On the bike there is no need for them at all, so why are they there? The only reason that I can see for using a good perceanage more tarmac than is needed, and in such a twisted way, is to make people cycling slow down.

However, this is only done in space that is available, so it's not really a serious priority. Notice the funny loop on the east side of the A1301 is not repeated on the west side because there's limited space. So, it's fine unless digging and/or land purchase is needed. What does that say about the real importance of the loop?

What is the pratical result of this peculiar cyclepath arrangement. Well, it's quite clear that most people cycling don't use it. So, for all the posible (although arguable) safety enhancements the result is that they are completely ignored. There are 3 paths that most people cycling adopt, completely legally, to avoid the unnecessary meanderings. First, even using both crossings, there's now a well worn path (in purple) cutting the corner and straightening the route. Then, for either direction a lot of people cycling simply completely ignore the cyclepath across the island and use the road instead (green and turquoise).

Effectively, any safety enhancements planned are so over the top that they are completely ignored, thus actually making the junction more dangerous not less.

So what should be done here. A simple answer would be the red route. Taking the cycle route further down the A1301 and crossing after the junction. This reduces the number of road crossings from 2 down to 1, reducing danger considerably. It's also of similar length and reduces the need to "slow down" people cycling, something that it close to our hearts!

This could be included in a revamped National Cycle Network Route 11 that goes alongside the A1301 (yellow route) to it's eventual destination at the mill junction (next one down). For school reasons, the current National Cycle Network Route 11does a big dogleg through the village. This is still needed for the school kids, but for anyone going further it's frustrating to have to go 40-50% further than necessary!

The knock-on from the red route change is that the road junction would become more limited. By putting the crossing in that place, the turn for road traffic from the northbound A1301 (so from the bottom of the picture) onto the "Cambridge Road" back to Sawston would have to be taken away. The lane for the turn appears in the middle of the road which would be required for a crossing island. Okay, now pan back on Google Maps to see how many may be affected by losing this turn. I can see maybe 2 locations, essentially nobody really. So no-one needs to do this turn.

Then looking at what removing that turn does. It means the only required road access form the A1301 onto the "Cambridge Road" is from the north (top), which is served by the slip-lane at the north-east (top right corner). So why not make the junction one-way only? The reduces the amount of space needed for the road and could be used to improve the cycle junction.

I confess I don't know when this cycling provision was put in. I suspect the past decade. It may be a small thing, but it shows the attitude. The entire scheme smacks of a complete failure to understand any of the practical results or spot any of the obvious gains by a bit more thought. What clearly has been thought: YOU CANNOT TAKE ANYTHING FROM THE MOTORISTS! NOT ANYTHING! And with that attitude goes a whole generation of potential transport improvements for all people, including motorists.
Posted by RadWagon at 14:03