Yet another sunny, blue sky morning greeted us. We were not impressed and wondered what we'd get by the end of the day. Nethetheless we put our best foot forward and considered breakfast.

Ah. When we were buying gas in the supermarket the previous day, did we consider the issue of bread for the morning at 2340m? No, I don't think so. The other slightly more worrying things were, in order, running out of beer, running low on wine, and running out of beer. If I didn't mention it earlier, I drank the last beer. Luckily, we didn't need beer until that evening, so bread was refocussed upon as the biggest need of the moment (although beer was at the back of my mind, just so you know).

We saw lots of people wondering around with fresh croissants. If only we'd thought the previous evening to order some from the col shop, sigh. We made do with slightly old olive bread and scrambled eggs. The French thought us mad to be cooking at that time, but what did we care!

I have to say that waking up and viewing the scenery from 2340m was "incroyable". The mountain ranges stretched away into the distance, some with dashes of snow where the sun couldn't quite bring the summer warmth to the heights. The valley dropped below us at an alarming rate, 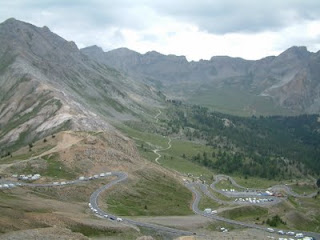 and even the valley floor was still at 2000m. Taking in this vista at 8am was special, something you get to do once or twice in your life and be thankful you can.

We had a little wander up to the col shop, and found it doing the french verision of hot dogs. It was saussicon with Dijon mustard, spicy doesn't quite cover it. After a bit of a position check we sat next to the car under a ramshackle shelter from the sun. I've got quite good at these, cobbling together clothes and poles and catching in car windows, using stones in sheets, 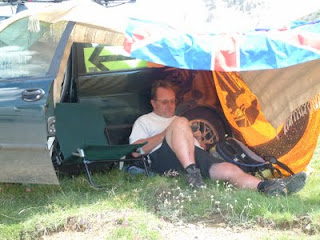 FSC lat style, to keep strings attached. Mind you I have to be good to create any shade in the completely dumb angle I always park the car at!

The good thing about being on this col is the way in which you can stand and see 3km of road winding back and forth from any position.

It was great seeing all the bunches of cyclists as they came up the route, one lot at one corner, the next at the following bend. Something was always happening in sight for a good 10 minutes! 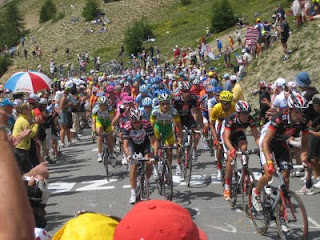 We cheering David Millar along and he heard us shouting in English in a sea of European!

We tried to do the clever thing and head down the mountain directly after the Tour, but it wasn't going to happen. There was a roadworks lorry parked in our bit stopping everyone leaving, and the police still had the barriers up at the col. It took about 20 minutes to get going and by then every Tom, Dick, and Harry was pulling out to get down the mountain. 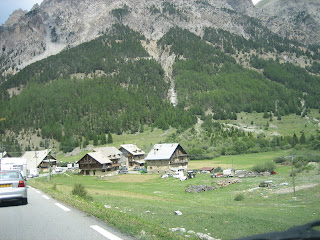 We descended 1100m into Briancon, which at 1200m is the highest town in Europe. We were looking for "Route Closed" signs for the next stage up and over col de Galibier. But we found none. I did find an extra special sign, the one used to direct the Tour round roundabouts. Not just an arrow, but a complete sign with a roundabout and a picture of a cyclist. This was the Mecca of signs. I pulled in oblivous to the queue of traffic behind and ran for the sign. I gave waiting for the police to go by and grabbed it right off the roadsign it was on. I had it!

We could find no sign of closed roads apart from signs saying it was closed, when we were clearly driving up it. Eventually we decided to just go for it and shop in Chantemerle.

The shop, a "Huit a Huit" was confusing to get into. Then we realised that the TV was on, everyone was watching the Tour on a bench blocking the normal route in. We immediately stopped shopping and started watching. The leaders were just starting up Alpe d'Huez! This was captivating. We dragged oursleves away and got the shopping done, including two large cut to order steaks. Then we were captivated again. the shop owner, clearly as frazzled as a gooseberry, offered us this god-awful liquer to drink whilst we watched the stage develop. It was too difficult, but necessary, to drag ourselves away from the screen to go and set up camp under threatening skies.

Gently climbing up col de Lauteret we could see the chaos ahead. Absolutely everyone, and their dogs, were going up Galibier. Now the route up from Lauteret is a twisty windy 1.5 car width affairs. Trying to go up there, to the place were there is space for 20 cars to park is not easy.

We looked for places from Lauteret down the side in which the Tour was going to come up the next day. We found our spot, not as good as previous days, but duly the heavens opened to confirm it was right. Sometimes you can just get this feeling that things were meant to be. We were meant to arrive at our camping spot in time to cook supper just s the heavens opened. 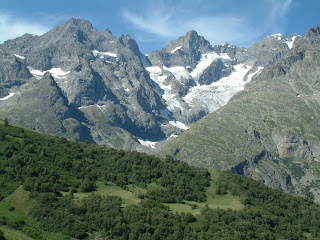 Another shelter was needed. Unfortunately we had no waterproof tarp, just nice cloths. It held for the time it took to cook and eat supper, but only just!

But there again, we are camped under a glacier tonight!

Stop Press: The rain left and after we'd given it an hour to make sure it was gone, we had to do sometinhg else. After all we'd gone to bed at 630pm to get warm, that's not a holiday! A fun walk up the mountainside beckoned, and we made our way through a lovely but wet alpine meadow.

I held myself back from charging to the top, throwing open my arms and going on about the hills being alive with the sound of, well I think you get the picture. Suffice it to say the dark pink sunset background to the snow-coved peaks behind Alpe d'Huez was worth the wet and the climb!
Posted by RadWagon at 14:00